The man behind the legend

“Behind a legend, behind the garment, behind the brand there’s always a person and this is the lesson that I hope you will enjoy today”, Director Danilo Venturi stated, handing the microphone to the Rendez-Vous guest lecturer. Indeed, when it comes to the rebellious wunderkind of British fashion, not many know the man behind the …

“Behind a legend, behind the garment, behind the brand there’s always a person and this is the lesson that I hope you will enjoy today”, Director Danilo Venturi stated, handing the microphone to the Rendez-Vous guest lecturer.

Indeed, when it comes to the rebellious wunderkind of British fashion, not many know the man behind the McQueen myth. Writer and journalist Andrew Wilson took it upon himself to tear down the heightened simulacrum in his book “Alexander McQueen: Blood beneath the Skin”, revealing an intimate portrait of a tortured genius who used creativity to keep his demons at bay.

The truth behind the seams

“We are going to talk about some of the very traumatic things that happened to him” Wilson began “which I will argue actually made him the one of the most powerful, visceral fashion designers of all time.”

Lee Alexander McQueen was born in 1969 to a working class family in East London and was the youngest of six children. Nothing in his background prefigured his rise to style superstardom – when as a young boy he hinted at his interest in fashion his father replied that he should get a job in the market stall. McQueen wanted more and did not give up. Although he left school with one O level in art, by the time he turned 27 he was at the helm of Givenchy’s creative direction and in 2000 he sold 51% of his namesake label to what was then the Gucci group, becoming a multi-millionaire. In 2010, however, he committed suicide just three weeks before presenting his latest collection at Paris fashion week. So what triggered Lee McQueen’s descent into darkness?

“A few weeks after his birth, McQueen’s father had a mental breakdown and was admitted into the Cane hill hospital, a traditional Victorian mental institution that surely influenced McQueen’s iconography, where you can actually spot the symbols of the asylum repeated over and over again. I think that McQueen was intrigued by his father’s bout of insanity and the idea of madness itself – of course, he had his own troubles with mental illness later on. Another important inspiration can be found during McQueen’s teenage years, when he would climb to the top of a tower block in his gritty pre-gentrification neighborhood of Stratford and watch the birds of prey circling over the flats. The symbol of the bird often pops up in his work and the silhouettes he invented were often compared to some kind of rapacious feathered creatures, so it is evident that the urban imagery of his youth fed into his creativity.”

Since childhood, McQueen was very conscious of his homosexuality and felt comfortable in his skin. But when he was 9, something happened to him that shook him at the very core, something that he never publicly disclosed.

“McQueen’s sister Janet, who was 15 years his senior, acted almost as a second mother. Unbeknownst to her, her husband Tony began to sexually abuse of McQueen. She was also a victim and was repeatedly beaten up as little Lee watched by in terror. These two deep psychological traumas came together in McQueen’s imagination, he fused his experiences with Janet’s and felt a need to purge himself of this sense of guilt, shame, anger and fragmentation – toxic emotions that were deep inside his self. You can see in McQueen’s work where this all comes from. One of the critics said that he ‘sewed anger into his clothes’ – there’s a visual sense that there’s something very deep, dark and disturbing. His fashion was not just about beauty – although many items are stunning – but about exorcising the ghosts of his past.” 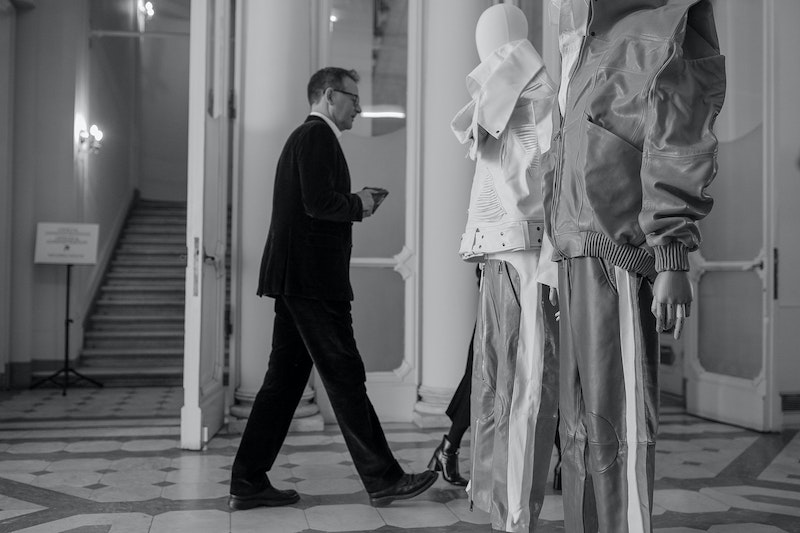 While doing research for the book, Wilson became very close with Janet and it was his priority to handle this sensitive information with the utmost care. McQueen himself, before dying, told his sister that he wanted a biography to be written and he wanted the whole truth to be told.

“McQueen was the least dishonest person – he presented himself as a monster but that was a form of defense. He was deeply vulnerable and scarred and protected himself by donning quite a difficult personality.”

A parallel can be drawn between McQueen’s desire to display a lawless outer armor and his 1998 Ready-to-Wear fashion show dubbed ‘Joan’. At the end of the catwalk, a masked model dressed in a red-fringed dress made out of bugle beads stands defiantly at the center of a roaring circle of fire. She is a strong, central image for McQueen’s work and the McQueen everywoman. He wanted to design for a woman who is a survivor, has faced and conquered the traumas of life and uses clothes as armor. He once said: “I want people to be afraid of the women I dress.” 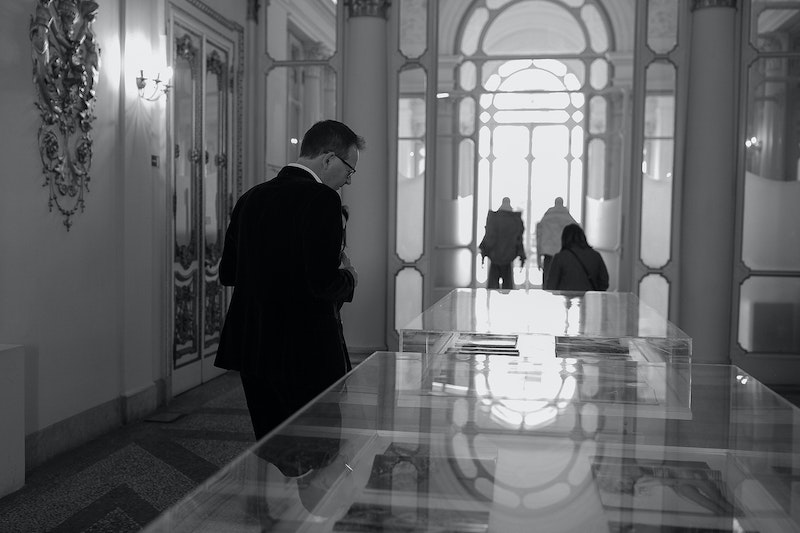 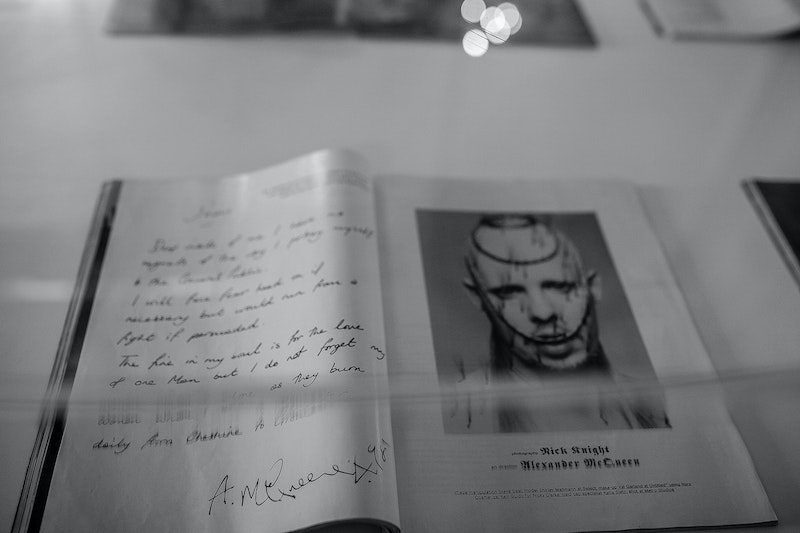 “In the McQueen mythology you get the idea of him being an instant genius, the Edward Scissorhands of cutting who could create a piece instantly, without training. But this is not the case, since it actually took him 7 years to study and learn the basics.”

McQueen began his career at 16 as an apprentice on Savile Row, a central London street renowned for its traditional bespoke tailoring for men. He moved on to work for Gieves & Hawkes and theatrical costumiers Berman & Nathans, before travelling to Milan where he landed an assistant role at Romeo Gigli at the age of 20. Here, McQueen learned the importance of self-marketing – he could see that good press was paramount in gaining credibility, as well as presenting one’s self as an important personality. After two months, he moved back to London where his talent was recognized by the head of the Central St Martins fashion design master program where, despite his poor educational background, he was accepted. He finally felt a sense of belonging among the misfits, the freaks and the creative bohemian and radical spirits of the school. His 1992 graduate collection – titled “Jack the Ripper stalks his victims” – was both savage and beautiful. It caught the eye of Vogue stylist and fashion editor Isabella Blow, who fell madly in love with his work and went on to buy many items in the line. The two bonded over their shared inner darkness and love for all things gothic, giving rise to a lifelong friendship that came abruptly to an end when Isabella took her life in 2007.

“McQueen knew the value of shock in creating a public profile for himself” Wilson continued, “He wanted the world to talk about his work so he created a world that straddled both runway and performance art. This happened in the 90s, when a great deal of experimentation was going on in terms of performing arts and exhibitions like ‘Sensation’ at the Royal Academy, which featured works by Tracy Emin, Markus Harvey and Damien Hirst. Everyone wanted to explore the human body. There was a great deal of extreme imagery and clubbing. In this context, McQueen met characters like Australian underground performer Leigh Bowery and Spanish fashion designer Miguel Adrover, who deeply influenced him. McQueen took in all this transformative, shocking energy and it was key in allowing him to feed the concepts of sex, death and body into his work. McQueen was shy but got a sense of freedom from his public persona, which offered him a chance of expressing himself in the same way as contemporary artists.” 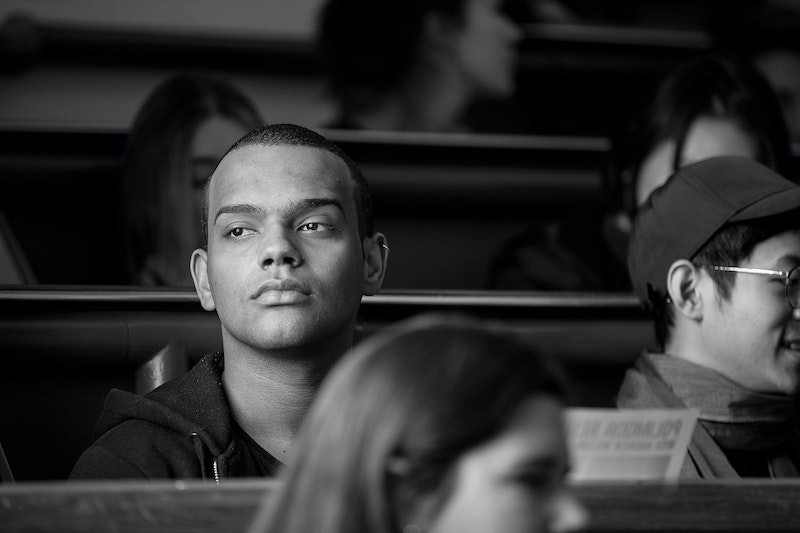 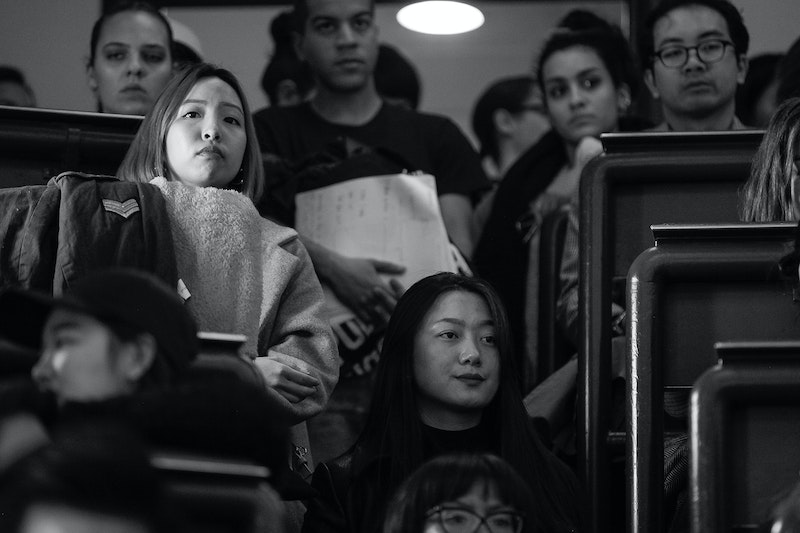 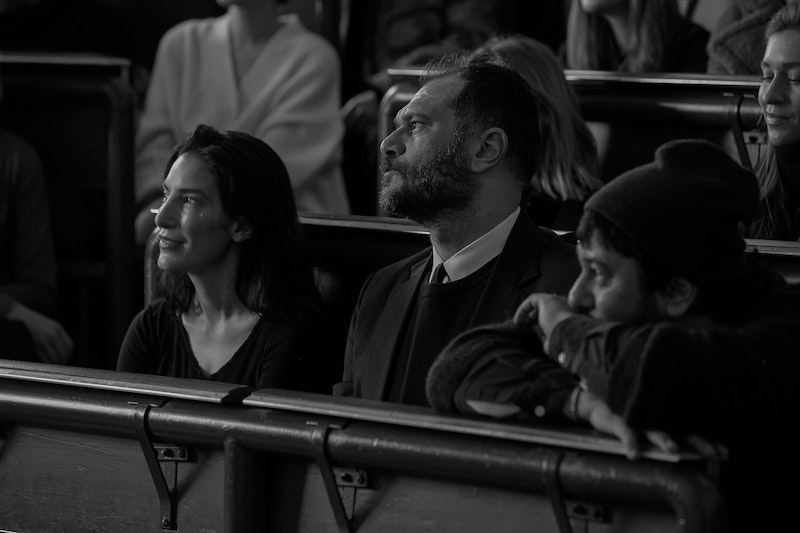 During 1996, Galliano went to Dior which meant there was an opening at Givenchy. In turn, McQueen was offered the position of creative direction at the house. His first collection was hugely attacked by the French press, which used underhand tactics and attacks to his personal appearance to criticize his work. He went from ‘enfant terrible’ to ‘elephant terrible’, which only contributed in strengthening the designer’s determination to succeed and overthrow all barriers. Fashion became Alexander McQueen’s gilded prison.

“When McQueen drew inspiration from Joel Peter Witkin’s photograph ‘Sanitarium’ for his monumental asylum-themed runway show ‘Voss’, he was actually addressing the death of fashion, the death of beauty and fashion’s increasingly ambiguous role. At the time he said ‘I can’t see myself staying in fashion. There is no substance, it’s not revolutionary and I’m tired of being the anarchist. If I were God, I would stop fashion for five years’. Many didn’t even try to understand his work and few took into account the deep psychology that was hidden within his garments. He was often accused of misogyny and never quite managed to fit in with the elitist fashion crowd. The gilded prison became even tighter when he sold his namesake brand to the Gucci group in 2000. His identity as a designer was no longer completely his. Once he signed the multi-million contract he began to crumble. He was using increasing amounts of cocaine and growing increasingly paranoid, to the point that in 2007 he announced to a friend that he was going to launch his last collection and that he planned on killing himself on the runway. The ultimate performance. His ultimate revenge.”

The suicide of his good friend Isabella Blow had opened a door for him onto another world, but the love for his mother, Joyce, was a strong deterrent. When the latter died in 2010, Alexander McQueen ended his life and, at his request, was buried on the Scottish Isle of Skye, where his mother believed his ancestors had lived. 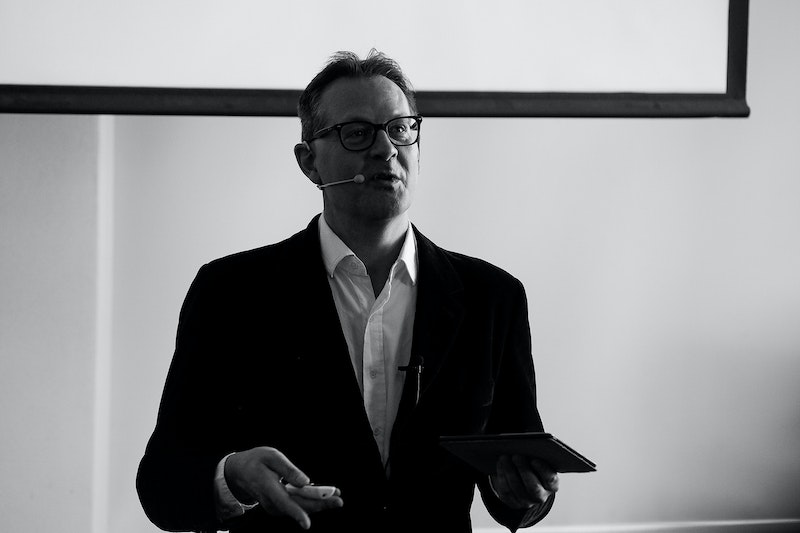 A splinter of ice in the heart

“Love looks not with the eyes but with the mind” Wilson recited the Shakespeare quote that McQueen chose both as a tattoo and which is engraved on his tombstone.

His philosophy was never about surface beauty but what lies beneath the façade of the everyday, of the normal.

“That’s why I titled my book Alexander McQueen: Blood Beneath the Skin”, for the underlying matter is always bloodier and more unsettling. I think it was important for me to be outside of the fashion industry – I was free to tell the truth. After reading an early proof copy, Janet McQueen said ‘this is the book that Lee Wanted’. I couldn’t ask for a better reception than that.”

For a less determined author, Alexander McQueen’s larger-than-life legacy and obscure past could have appeared as too much of a task to tackle, but Andrew Wilson followed his writer’s instinct, sensing there was more of a story to tell behind the glamour.

“He took something really dark in his life and made something extraordinarily beautiful out of it. While writing the book, sometimes it was hard to go through the episodes of sexual abuse and violence but, as Graham Greene famously said, a writer has to have ‘splinter of ice in the heart’. You have to maintain a certain objectivity and become a detective of sorts; following leads without letting emotion cloud your judgement. But you also need a sense of empathy and humanity, especially when dealing with such psychological complexities. It helped give me a deep understanding of the human spirit. Personally, I think McQueen should have stepped away from an environment he was finding increasingly toxic. He could have become a performance artist, a photographer, a journalist or, as he envisioned at one point, the director of a gay porn studio … He should not have died for fashion.” 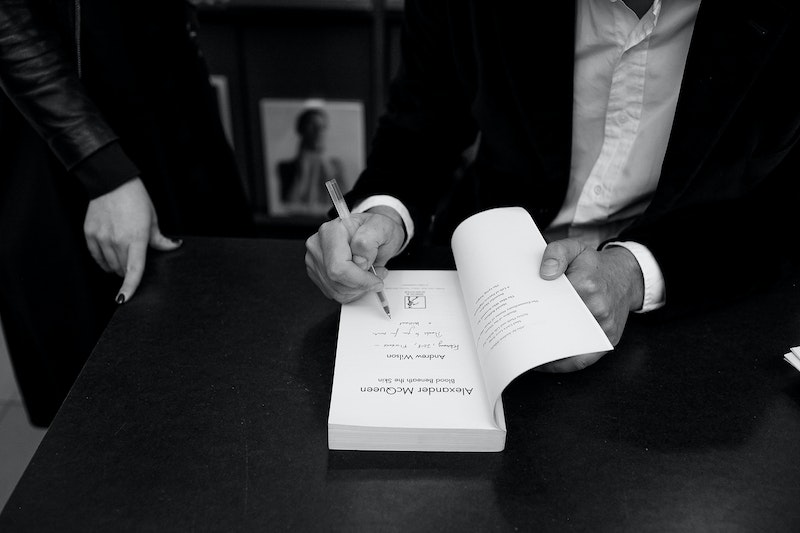 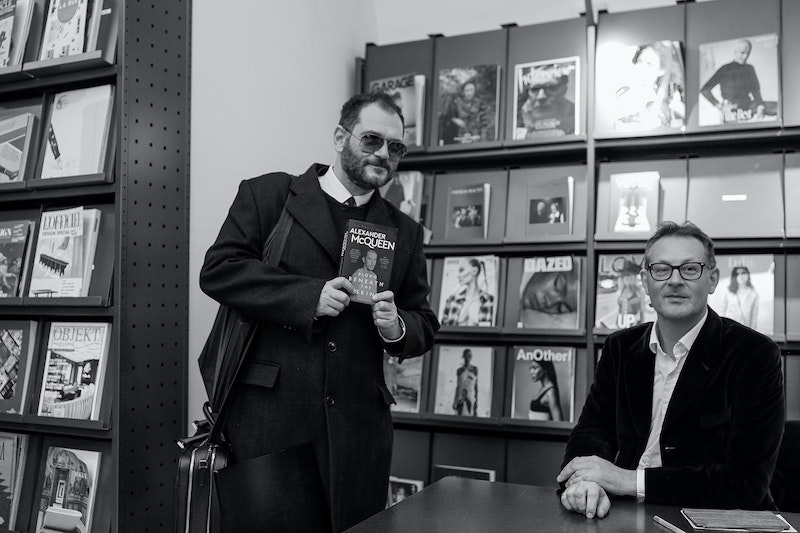