The alternative system of Damir Doma

Damir Doma’s namesake brand is known the world over, and justifiably so. Launched in 2007 in Antwerp, Doma quickly gained a cult following for his pure and composed garments. Evolving his sense of uniformity and proportion throughout the years in Paris, in 2015 Doma decided to relocate the brand and begin presenting his collections in …

Damir Doma’s namesake brand is known the world over, and justifiably so. Launched in 2007 in Antwerp, Doma quickly gained a cult following for his pure and composed garments. Evolving his sense of uniformity and proportion throughout the years in Paris, in 2015 Doma decided to relocate the brand and begin presenting his collections in Milan, now making the Damir Doma show one of the most important runways on the Italian calendar.

November 11th, 2016 as part of Polimoda’s Rendez-Vous series that invites each month an iconic figure from the fashion world to come and speak with students, Damir Doma had a conversation in the Aula Magna auditorium. The Croatian designer explained his authentic vision, how he sees his own brand, and his opinions on luxury. 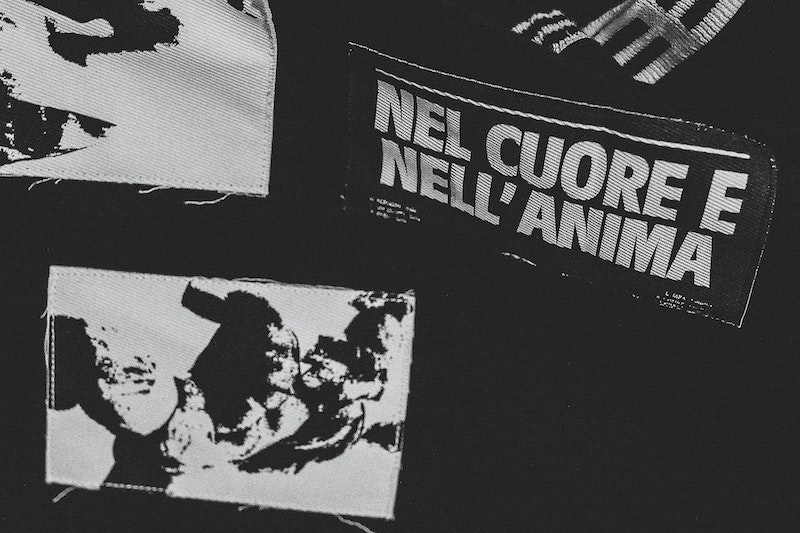 How did it all begin?

Obviously, subtly, I’m somehow inspired by going to exhibitions, by seeing people, by talking to people but the moment I start working it’s coming from a conceptual idea of what I want to do. Sometimes the outcome might look different to the starting point, but I think the process of creation is for me, very important. I try to consider from the beginning how the material and the volume should interact and that’s actually why I do the job. I don’t do the job to do the fashion show; I don’t do the job to see people wearing my clothes; I do the job for the process, for the research, for the concept, for the sculpting of the clothes, the patternmaking, the fittings, the interaction with the team; this is why I do the job.

Why did you initially move from Antwerp to Paris?

Once you start the brand, you’re very naïve because it’s a very complicated thing. From a certain point, obviously it starts to become also a business. In the beginning it’s not a business. Moving to Paris was a business decision, as moving to Milan was a business decision. When we decided to move to Milan I was actually rather happy because before we moved to Milan for the last three years I was travelling almost every week there to do the collections. So in a way it was completely senseless to live in Paris and to work in Milan.

And now your collections have been incredibly well received in Milan, consistently.

Yes, and I’m really happy about that. Context is important. When I started menswear, the type of menswear I do or I did, did not exist at that moment. There was just the high of Hedi Slimane and this super skinny silhouette. My volumes were much softer and much more draped, and that’s because my menswear was very much inspired by womenswear. They were very playful, conceptual volumes. I think what I realised later was that by repetition of the same idea you can create your own language and you can create also your own classics that get recognised by others. And that was something very interesting for me. I think at the moment I’m just doing what I love for myself and for my friends, so I think also my perception of my own work changed a little. 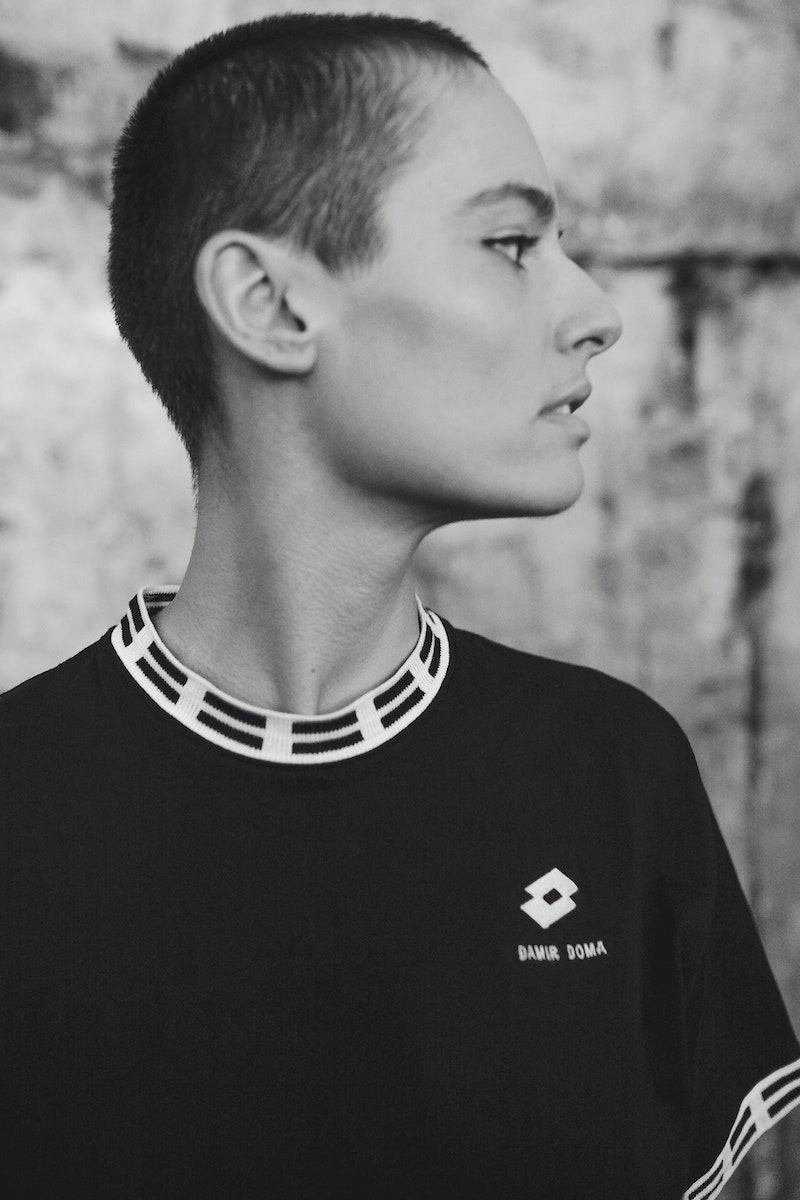 How important is owning your own company and being able to make these things personal on your own terms?

I always had a partner in my brand. My partner though is not an investor – he works with me in the company and shares very similar values to me. I love my job and I love the process, but I don’t love the brand. If the brand is gone tomorrow, I will do something else. I don’t have to earn the brand, and it’s also not important for me personally.

For so many designers who are straight out of school, they want to make their own brand. What do you think about this?

I think something that is very important for students to understand is that there is the brand and the image we create, and then behind that there is the reality: there is the capital, there’s a company, there’s an atelier, there’s a whole structure. And that structure is sometimes much smaller than we think. And I think that this is something that I realised only when I started to work as an assistant, even as an intern. I think this is really crucial for students to go through this period of working for somebody. I think students who come from school and think they want to do a brand is really not so wise. Especially because when you finish your school you are still very young, you have all the years in front of you. These two, three years, four years when you will work as an assistant designer will give you much more than they will take. I think it’s really crucial to go through this period. 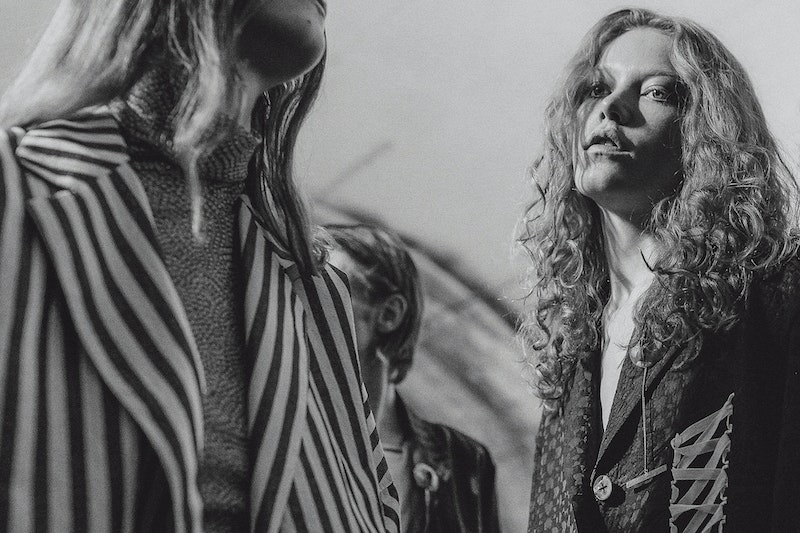 Do you think a designer is able to be their own business manager as well?

I think there are people who are able to do it, but it depends on what type of fashion business you’re doing. I think the more creative your fashion business is, the further you are away from a business mind. With somebody who is working on the creation of a whole universe, with the imagery; somebody really, deeply creative, I think it’s very difficult to ask them to deal with money. I have the experience that most people can’t deal with it, or, like in my case, I can deal well with business but I can’t deal with it at the same time. I need to create for myself a bubble and a certain environment where I don’t think about how much is this going to cost, what do we have to pay, how much do we have to invest. Then once this is done we can talk about the rest. I’m a very logical person so it works well for me. But I can’t mix it.

How do you see that things have evolved for you personally and also for your brand, if those two evolutions are separate, that is?

There’s so many levels that we could talk about this but I think there are some very clear milestones in these last ten years. There is the evolution from starting with menswear that was two collections per year to the peak where it was ten collections a year, to now a situation where it’s two shows a year with four collections, so mens- and womenswear together. I think there was so much change and so much evolution in the last ten years in the business, and I think as a brand we constantly had to adapt to the situation. I guess the good thing about being a rather small brand is that you can be dynamic. 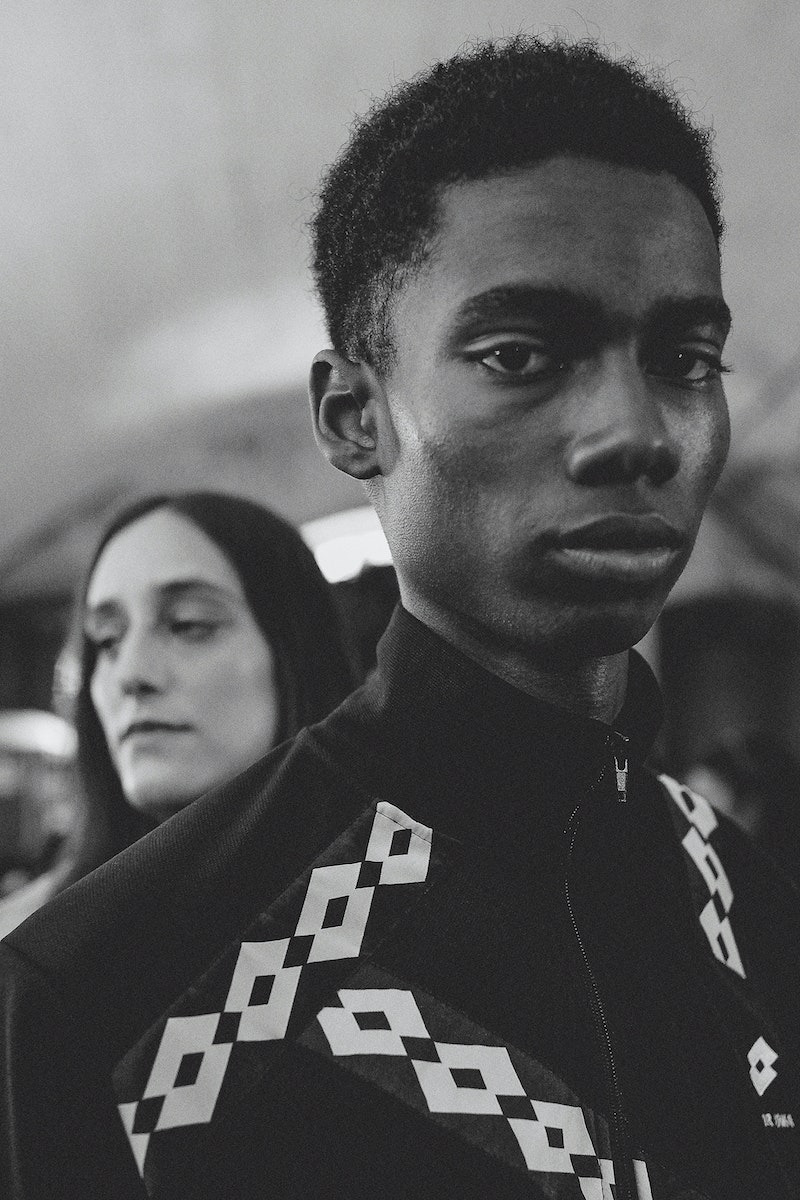 But now it’s something that makes a lot of sense; presenting women’s when pre-fall is being released anyway. Now, every brand is doing this, but you were way ahead of the curve.

But for us it was for a different reason. I think to create new things you need time to make mistakes because only by mistakes you can create. But to do these mistakes and to create these materials – and to try this and that – you need time. I think that this was really the most important decision of the last years.

Is this idea related to what you consider to be luxury?

It’s a very complicated term for me because I think that it’s implemented by the luxury groups. I think that there exists a different idea of luxury already and I think there are people who are interested in a different luxury; into let’s say something more individual. 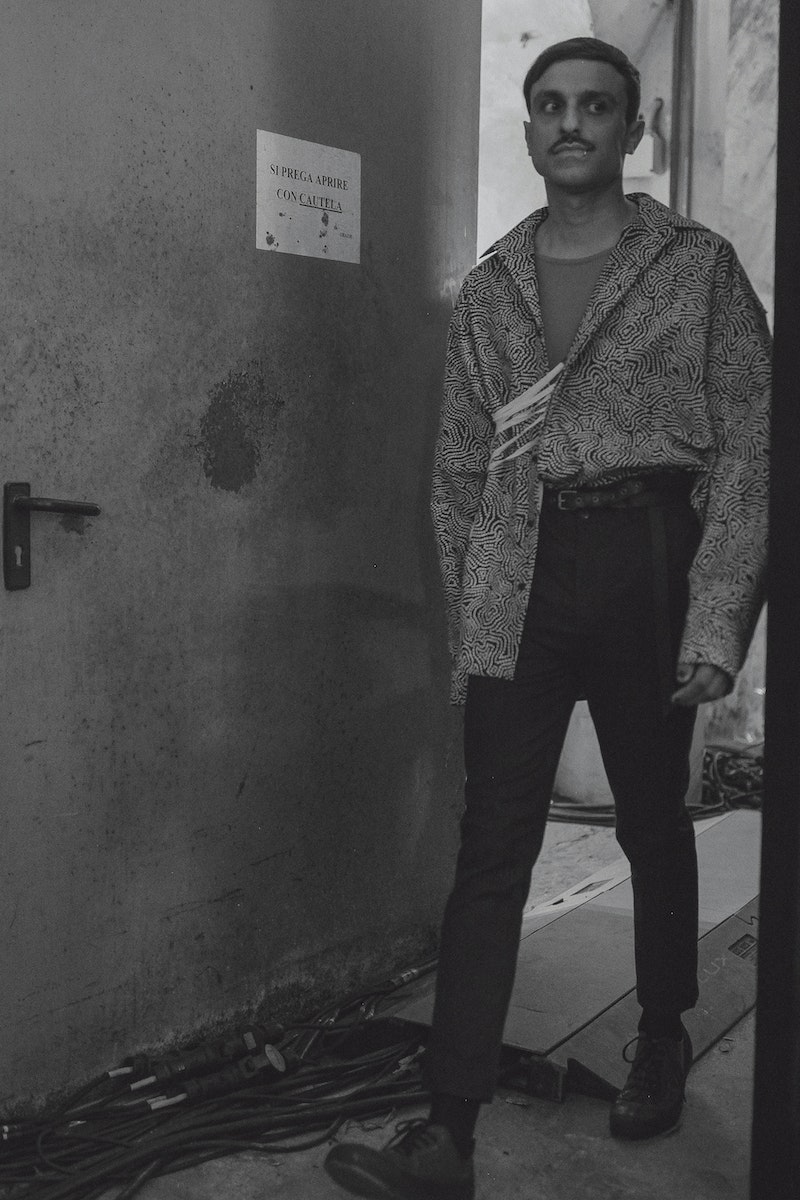 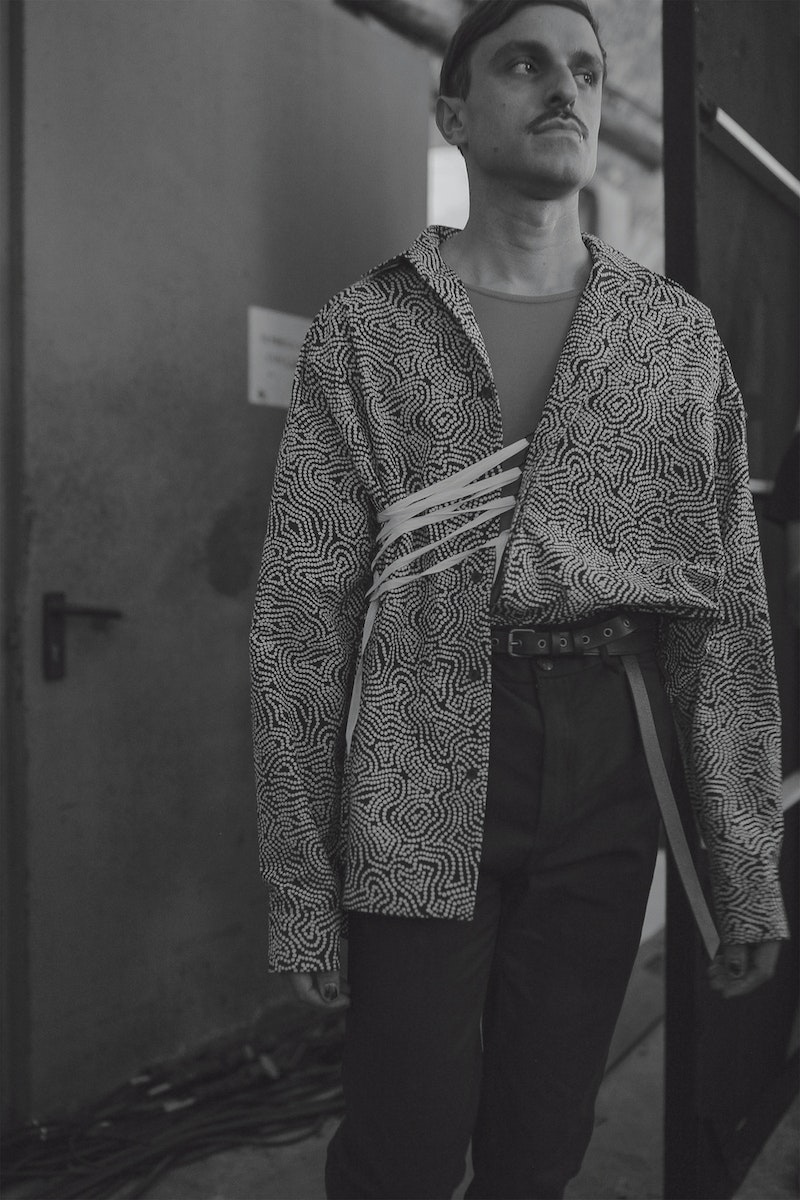 Do you have any advice for a new designer today?

I think that it’s important today for a young brand and for a young designer, to not try to be mainstream. We need to have some type of borderline mentality. We need to have a position different from the middle otherwise we’re not visible, especially in today’s environment where it’s very difficult for a young designer to have visibility. And that’s why it’s interesting at the same time now social media is kicking in because that allows us at least to have visibility again. I think today there are tools that allow us to build an alternative system.

With this alternative system growing and the industry changing, are you still learning in a way?

I think this is so important. I think I’m learning every day. I think for me personally, it’s very important to have that mindset, and it’s important that everyone who’s in my company has this mindset. Because sometimes I have people who think they’re great. I don’t like attitude. I don’t appreciate it. Even if you think you know something well, you can still know it better.

What kind of people do you look to hire in your company? 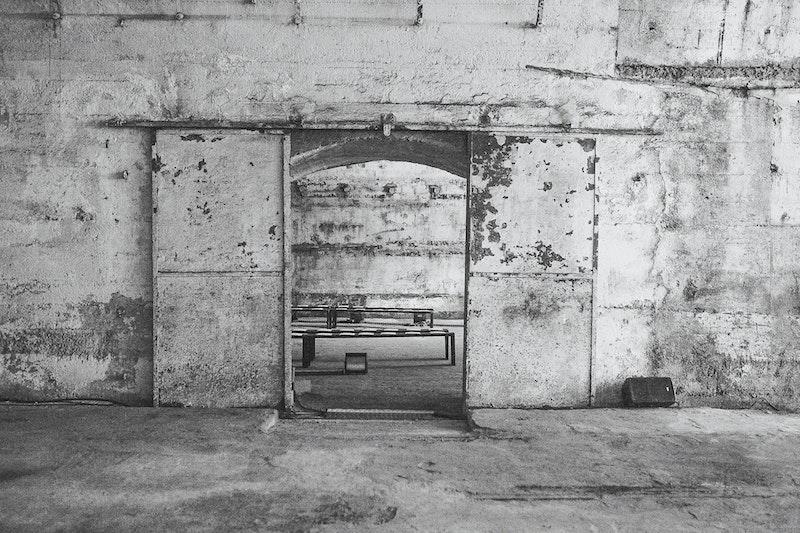