With rubbish, outdated materials transformed into spirited, luxury garments, Giunia Guerrera’s collection left a lasting imprint on the Polimoda runway. The jury of fashion’s elite, all well versed in the realm of catwalks, were struck by the young designer’s well-elaborated pieces, awarding her the title of Best Collection of 2018. Between innovative silhouettes playing with …

With rubbish, outdated materials transformed into spirited, luxury garments, Giunia Guerrera’s collection left a lasting imprint on the Polimoda runway. The jury of fashion’s elite, all well versed in the realm of catwalks, were struck by the young designer’s well-elaborated pieces, awarding her the title of Best Collection of 2018. Between innovative silhouettes playing with classic forms, old-timey prints and brass details, Giunia’s collection Sentimental Materialism reflected how social media has induced our society to accumulate objects to demand attention, morphing and distorting our identities to a point of disequilibrium.

Having graduated from Fashion Design at Polimoda, Giunia is about to make her first steps in the industry. We took a moment to ask her a few questions about her experience and what’s in store for her future. 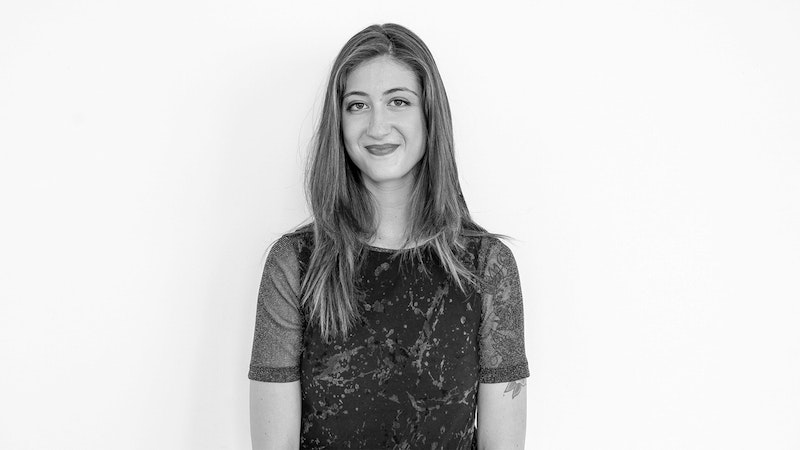 When did you first become interested in fashion and/or designing garments yourself?

I have always been drawn to art in all of its forms. At Polimoda – through the various phases of design, draping, graphics and so on – I realized that fashion is the field that best allows me to express my creativity.

Does your Italian heritage and identity play a role in your creative process?

I think I am influenced both by my being Italian, in terms of culture and art, and even more so by my Neapolitan roots – I am the daughter of a city deemed a crossroads of cultures, inspirations and colors. In my latest collection in particular, I used still lifes from the Neapolitan tradition, which I photographed in unconventional ways and then transformed into printed fabrics.

What made you decide to come to Polimoda?

I considered several options before choosing Polimoda. My decision was very instinct-based, as I immediately felt part of an educational project that was both wide-ranging and in line with my sensibilities.

You also showed your work at Graduate Fashion Week in London this year, which took place only a week before the Polimoda Show. What was it like preparing for two runway shows in such a short period of time?

Preparing the collection and finalizing it for two fashion shows, all only one week apart, was a very difficult task for me, both physically and emotionally. Furthermore, I felt the responsibility of representing Polimoda at GFW. In the end, it was an experience that gave me the degree of strength and tenacity that I now carry with me.

Could you tell us more about the inspiration behind your collection?

My research focuses on the themes of a liquid society – hedonism, ephemeral relationships, man-smartphone symbiosis – ultimately, the identity and values crisis of the Western world, where the only means of measuring social recognition is visibility at any cost. In my garments, draperies that protrude from the body challenge the desire to be seen, which ultimately destroys privacy. 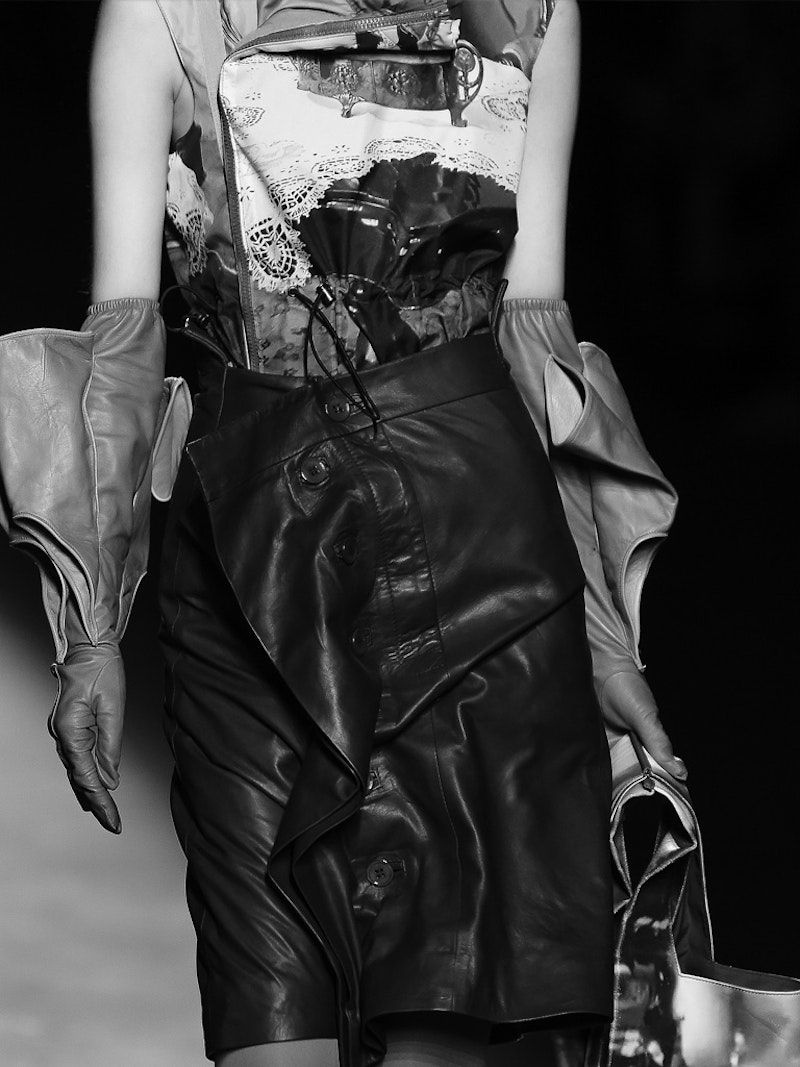 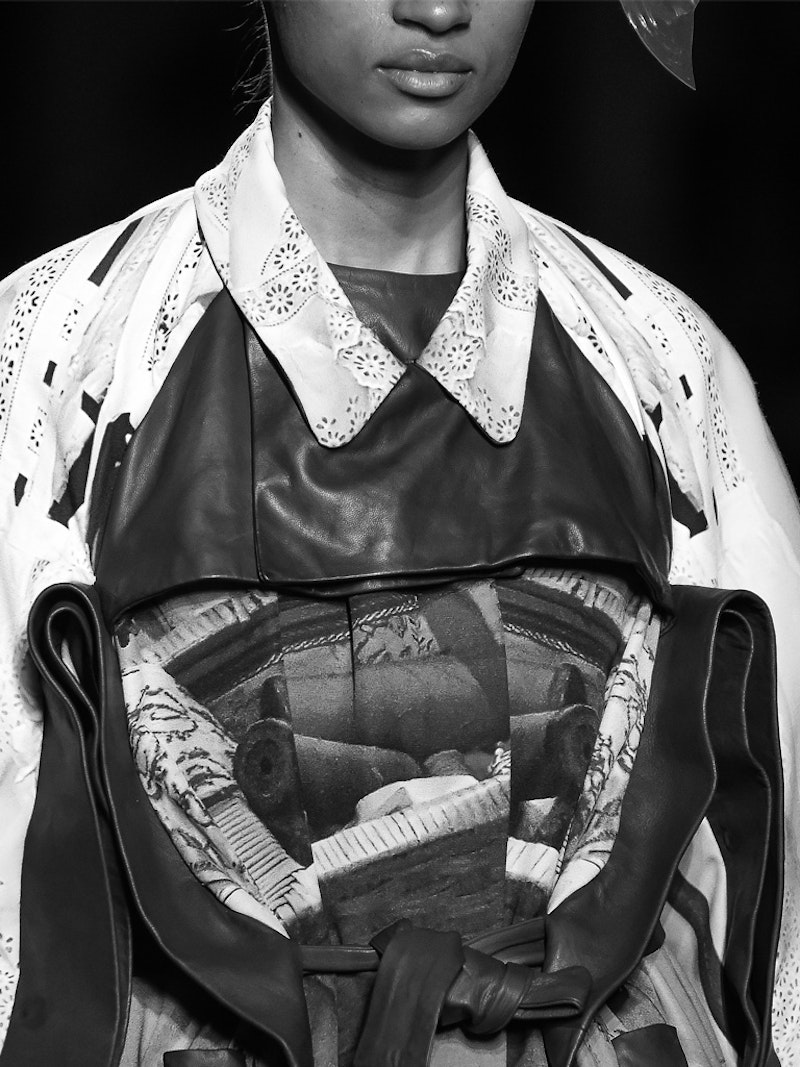 How did your family react to your work?

My family saw the collection grow since I was in Naples for the production of my leather pieces. Regardless, the impact of seeing everything on the runway was a very emotional experience for them.

What do you wish to transmit through your clothing?

First, I’d like my audience to see a story of protest in my collections. For me, experimenting with creative forms is very important, but at the same time I want to create wearable clothing. I like the challenge of giving life to something new and concrete. 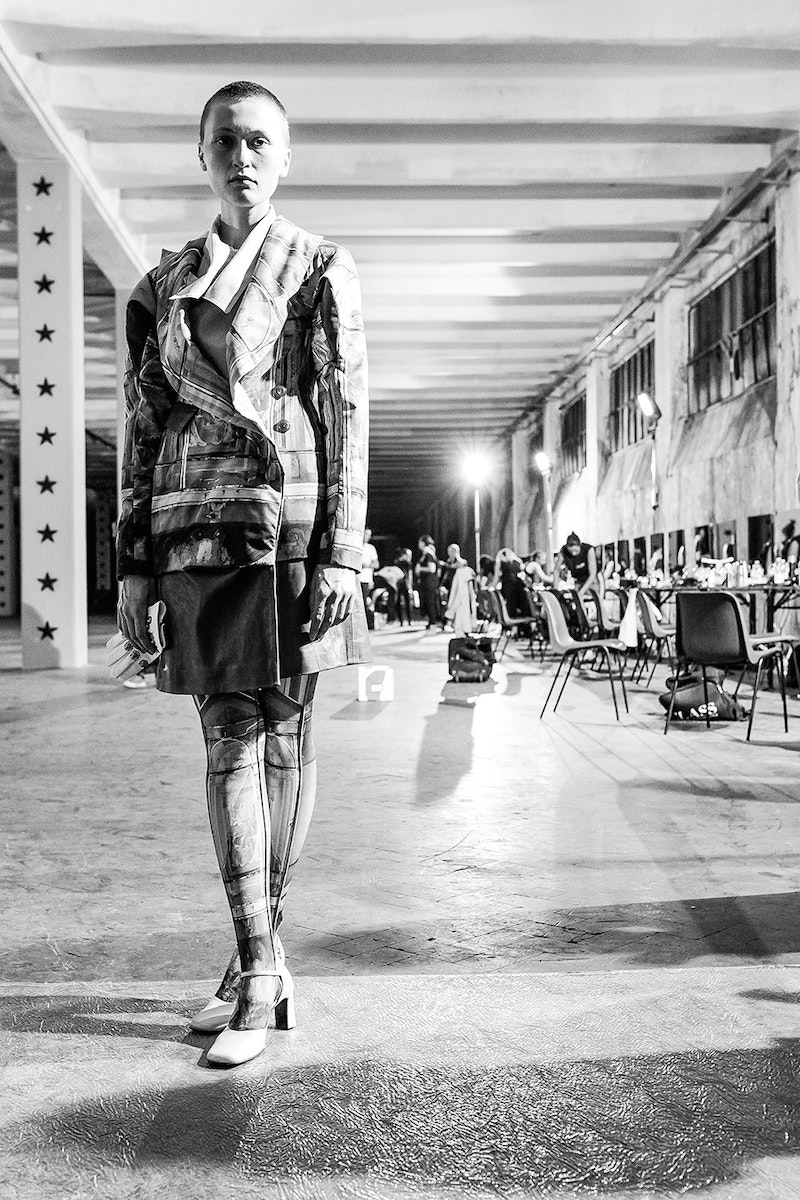 Could you explain your use and fascination with brass objects in this collection?

The brass objects retain symbolic and emblematic meaning for the collection: they are jewels that no longer have the value of their past and thus represent the collapse of values that we are currently living. The incrusted brass objects reflect the compulsive accumulation of objects and clothes – things that make us desirable but that immediately become obsolete.

What role does conscious design play in your identity as a designer?

I believe in recycling as a means of reinventing, like the use of brass objects found in flea markets. Another way I express myself against consumerism is displayed in the collection’s handbags, which are all canvas sacks and bags.

The show jury included some pretty big names, including Diet Prada, who are notorious for calling out designers that plagiarize or lack originality in their work. How did you feel presenting your collection before this kind of audience?

I am proud to have been awarded by a jury of this caliber. In addition to publishing photos of my collection on their Instagram, Diet Prada congratulated me for the originality of my proposed pieces. Considering the accusations they post (of fakes, copies, etc.), their approval was extremely gratifying. 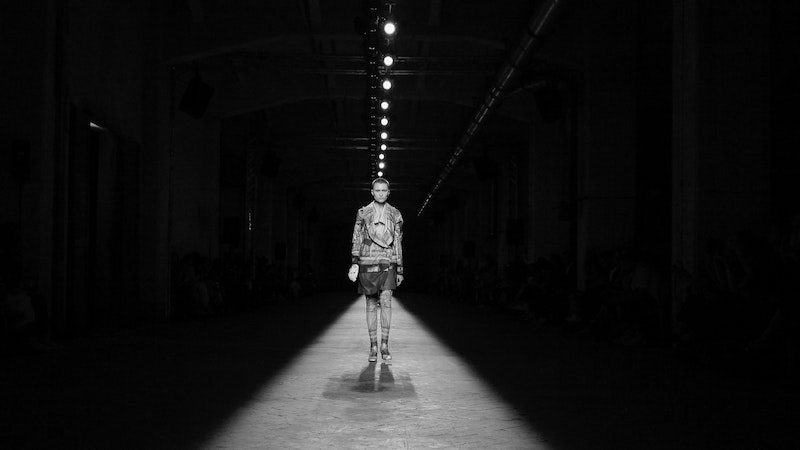 What kind of woman do you envision wearing your designs?

I see a woman who doesn’t want to adapt to stereotypes, to labels or conform, who lives in a liquid state and fights to protect her personal and singular reality. She disputes the mediocrity of society, wearing clothing that is altered like the reality that surrounds her.

What are your plans for the immediate future, professionally speaking?

After completing my studies at Polimoda, my educational program foresees an internship. I’m in touch with a few companies abroad, within which I hope to find and explore a variety of different experiences, environments and sources of inspiration. This is what I ultimately need: to better understand myself, my ability to work in teams and to create ideas for others.

What are your dreams for the long-term future?

After having completed countless experiences, confronted myself a thousand times, grown up and developed a stable profile as a designer, the dream is to build a dimension in which I can fully express my personality.