Behind the Fold: Deconstructing Rick Owens

Dubbed the high priest of 90s avant-garde and the “antithesis of Hollywood glamour,” Rick Owens is time-honored as one of the most influential and fêted American designers in the history of fashion.

Eight months after closing, and for the first time in the history of the brand, a selection of these archetypal pieces made their classroom debut, becoming protagonists of a two-day workshop with Owens’ Head of Women’s Patternmaking Ahmad Daher. Ten of the most symbolic garments from the Triennale were set up in the rationalist setting of Polimoda’s third campus in the Manifattura Tabacchi, “an evocative space that harmonizes consistently with Rick Owens’ style and aesthetics,” comments Daher, creations laid bare to unearth the technical mechanics of Owens’ method to the next generation of creatives. 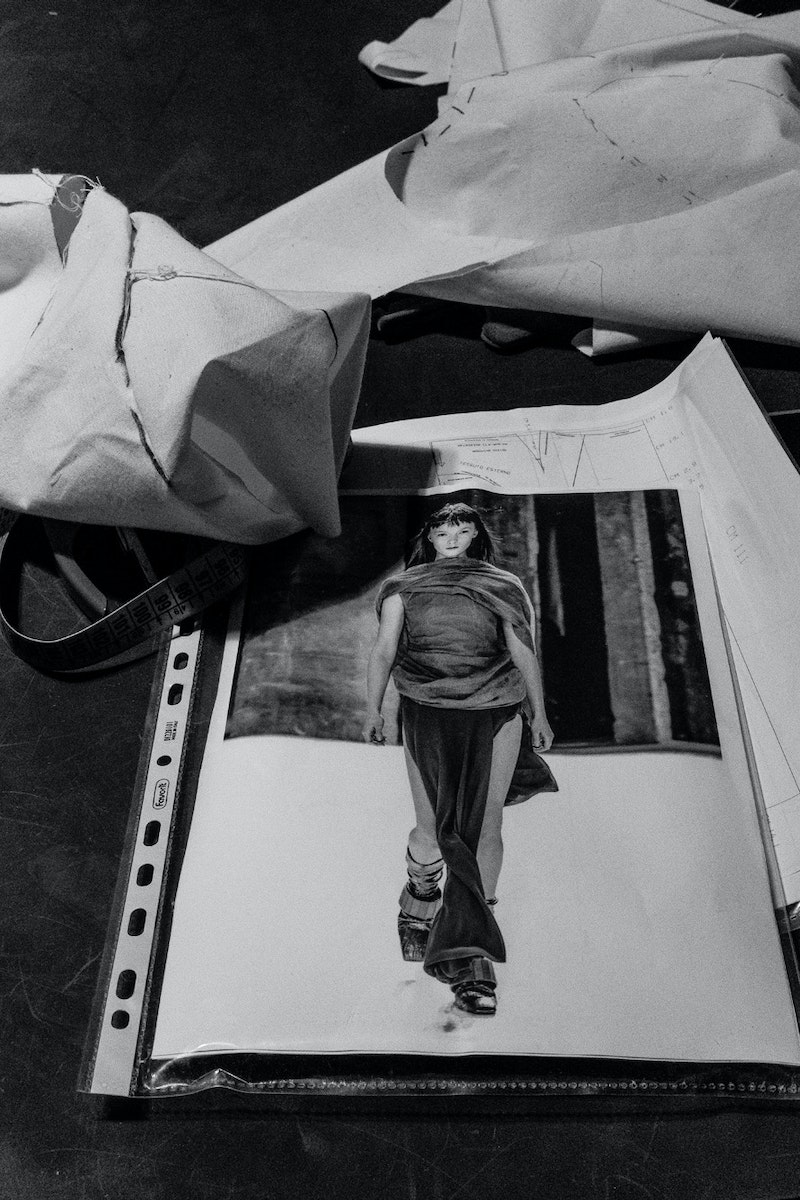 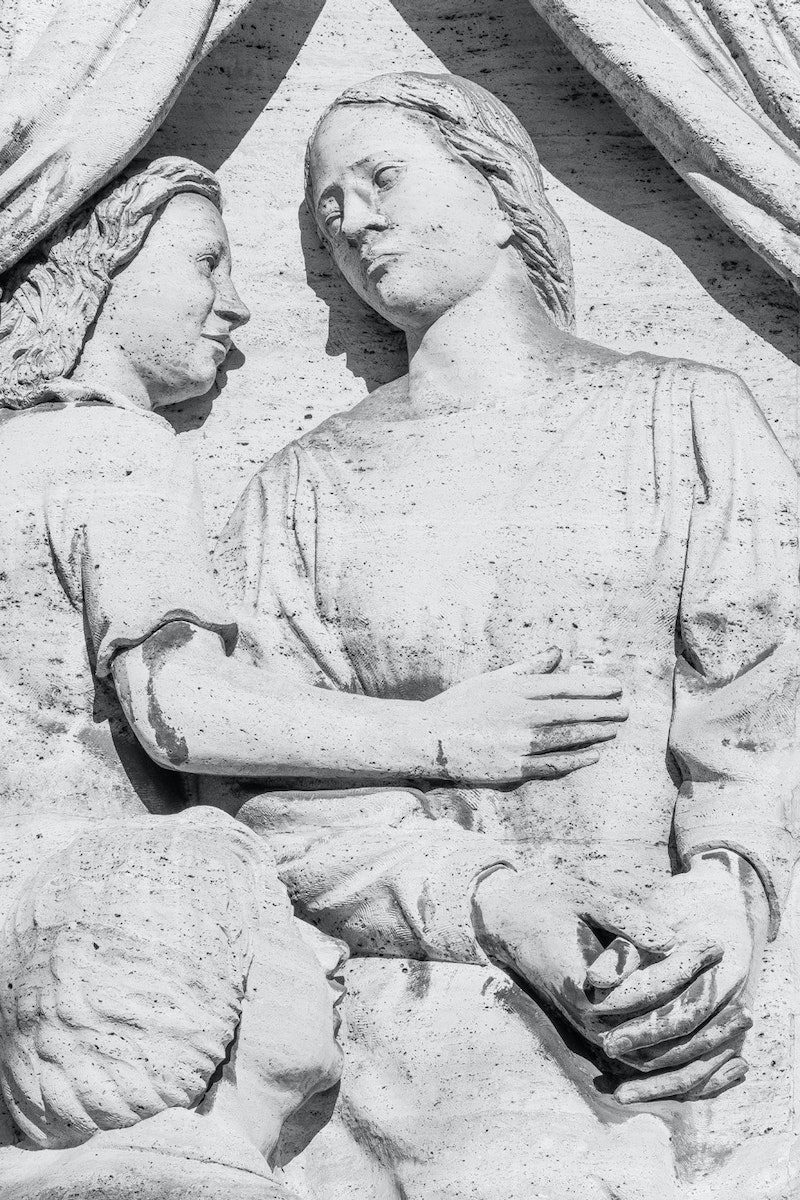 “I wanted to tell stories of patterns and details of pattern engineering by walking and leafing through twenty years of Rick Owens’ runway,” explains Daher of the aesthetics and patternmaking seminar, which involved final-year students in Fashion Design and Fashion Technology. “The items selected from the Subhuman Inhuman Superhuman Archive are the autobiography of a designer who loves the technical process of creating… In every creation, Rick Owens is always looking for the straight line that joins point A to point B, a philosophy that translates technically into a modest silhouette: simple, elegant, radical, futurist with an ever-present pace in a fast-moving world.” 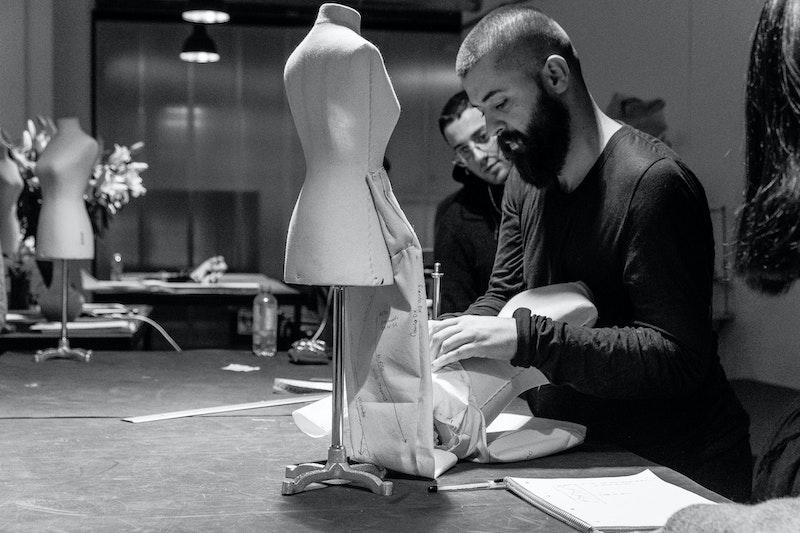 From the volumes of Thayaht and Le Corbusier to the industrial influence of Land Art’s Richard Serra and Michael Heizer, without art, architecture and design, explains Aurora Fiorentini, Rick Owens’ fashion would not exist. The Polimoda teacher and longtime industry expert dedicated the first portion of the workshop to introducing Owens’ values and poetics as deviating from the realms of mainstream and commercial fashion, unraveling the aesthetic archetypes and artists that most influenced his constructive philosophy and volumes.

Following the lesson, Daher used mannequins and the Triennale pieces to visually guide students through the pillars of Owens’ fashion, touching on the bias cut and pattern, cascade draping, the construction of twisted draperies and the Pillar silhouette, among others. “We told the story of Rick Owens’ bias cut and his strong connection to Madeleine Vionnette and Madame Grés,” he explains, referring to the technique of cutting fabric at a 45-degree angle championed by Vionnette and Grés in the 1920s. “The bias cut was the protagonist of the workshop, where together with the students we transformed a classic base into a bias construction.”

“Among the great couturiers of the past dear to Owens,” explains the Polimoda expert, “we also investigated a genie often forgotten in American fashion history: Charles James (1906-1978).” A predecessor of an aesthetic that triumphed in the late 1950s – sculptural silhouettes and evening gowns supported by complex, self-supporting internal scaffolding – James is most known for the influence of nature on his work and his innovative evening jacket (1937): a piece made of cellulose acetate entirely quilted with feather padding, resulting in a satin-like effect, very similar to a modern puff jacket, Fiorentini describes. 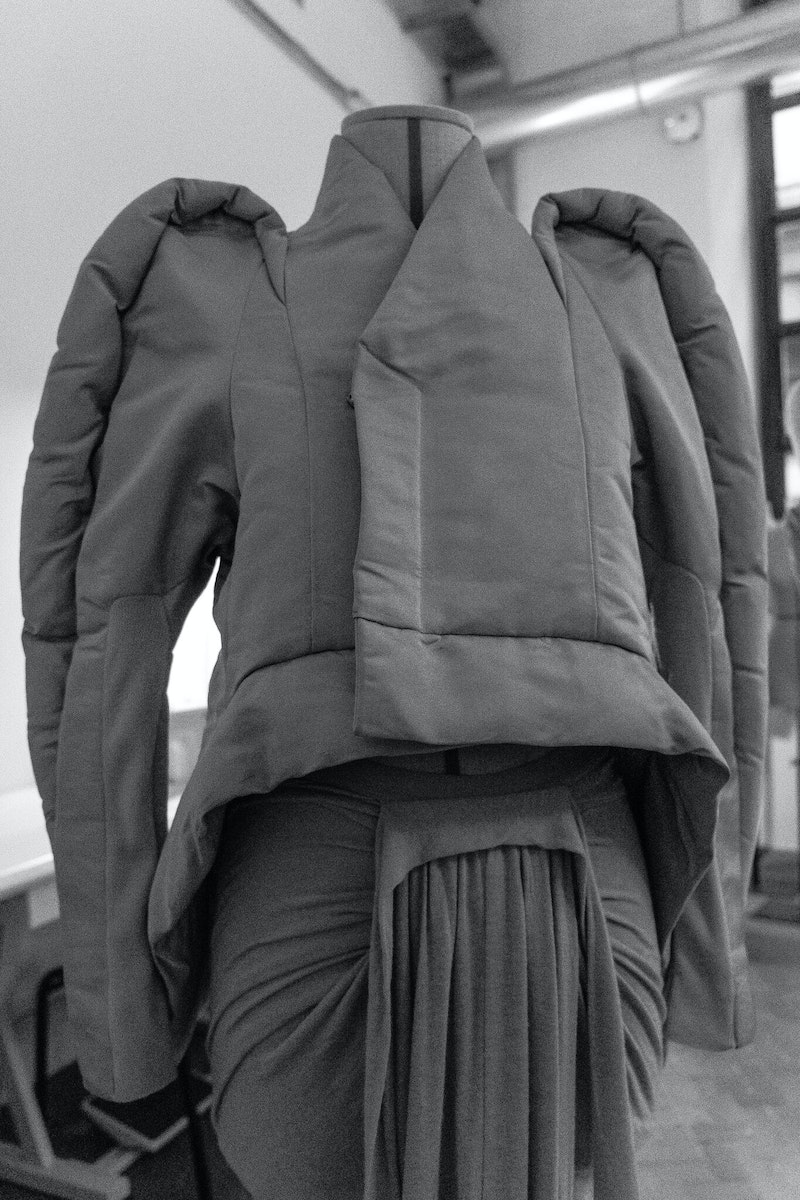 Defined by Salvador Dali as a “soft sculpture” for its strength and harmonious three-dimensionality, the jacket served as a significant point of reflection for Owens: “United by the search for the new and unusual, as well as by a passion for volumes carved in fabric, the two American designers reveal many similarities in their study of the female body and the search for a timeless style, even if marked by very different languages,” clarifies Fiorentini.

“More interested in art and architecture than in the history of fashion, Owens, however, makes exceptions for true champions like Thayaht, Vionnet, Madame Grès and Charles James: in fact, starting from his Citroen SS 2004 collection, he intensifies his studies on the latter and in particular on the 1937 quilt, elaborating models of jackets and dresses that recall its composition, employing new cuts, techniques and distinct materials, including very light leathers and hides, jersey of various weights and fabrics with textures and colors that are immediately attributable to his unmistakable and personal style,” she continues. 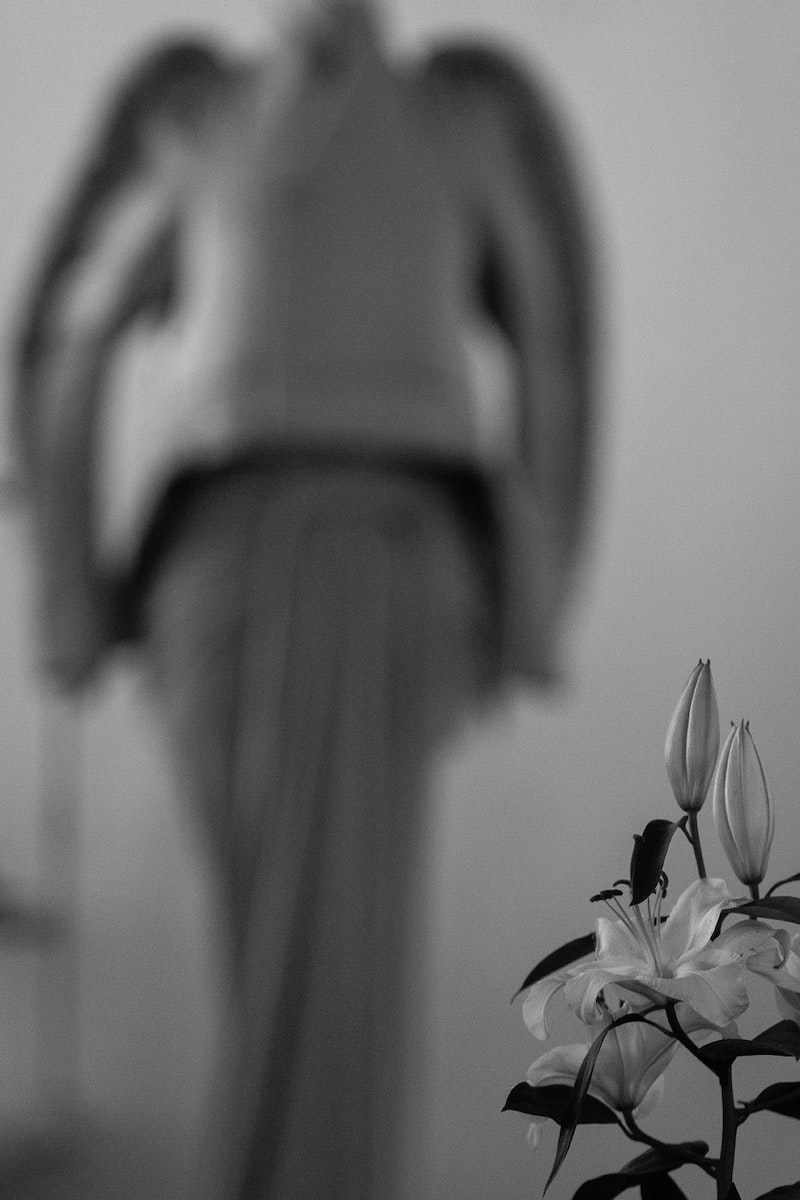 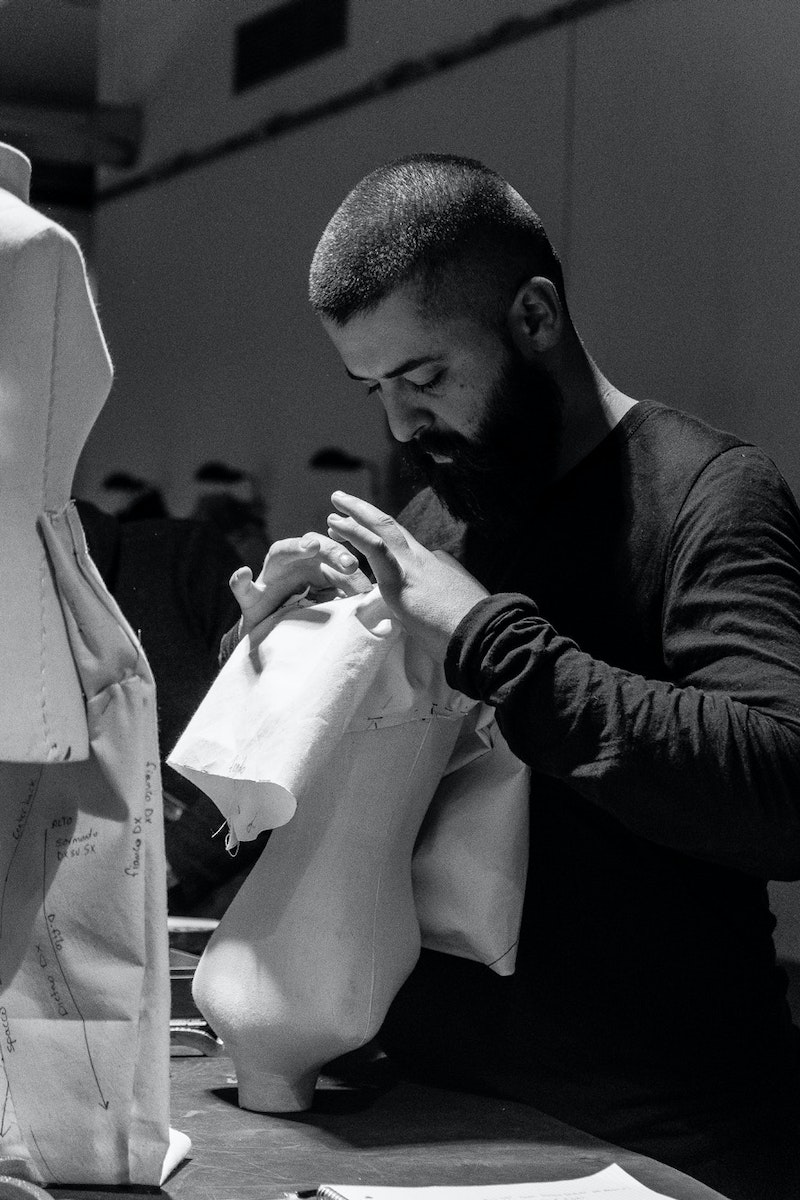 In the Scorpio SS 2005 show, the Polimoda lecturer elaborated to the class, Owens modified the shoulder line in line with James’ prototype, opening its folds and transforming them into triangular points with a strong visual impact. In the Tungsten SS 2006 and Dustulator FW 2006 collections, he softened the contours, rounding its profiles through complex biasing, or by amplifying the curved line with folds, ruffles and cuts that emphasize continuity between the neck and shoulders. “From the Limo FW 2011 collection until his latest show, we find James’ cult coats witnessed in new interpretations, emphasizing big Renaissance sleeves shaped by an arched perimeter, all marked by technical fabrics alternating between the glossy and opaque,” adds Fiorentini on James’ enduring influence in Owens’ work.

During the Polimoda workshop, Daher and students worked to reconstruct the cult coat form, using small-scale mannequins to explore the way a traditional shape can be reinterpreted through cut and material. After working with students to engineer Owens’ most noteworthy garments, Daher closed the lesson by moving to one of the designer’s most iconic pieces inspired by the Parisian Art Nouveau, a personal tribute to the architect Hector Guimard (and baptized by Owens himself): the “Guimard Jacket.” As Daher demonstrated, this garment is a structure on which huge pieces of a technical fabric are draped, folded and screwed, then coated with a thin sheet of laminated aluminum and coupled with neoprene, resulting in a moldable, concrete-like sculpture. 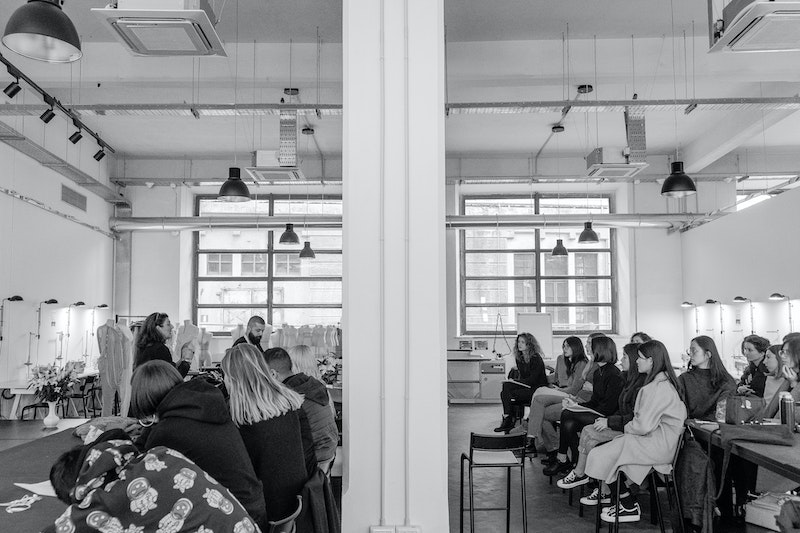 In his current tenure since 2013, Daher recalls the process of creating the jacket with Owens: “We started from the base, realizing a simple jacket in canvas on which Rick Owens could drape and create volumes in canvas/calico and then pin them on the jacket base. After that, the pattern team’s job was to make the pattern-finding technical solutions to move to an industrialization step. In this, an important aspect was the process of sewing the thick materials; the task of the pattern team, together with the team of tailors, was to find the right compromise between the silhouette and technical solutions, among which was discarding the seams, removing the pleated bottoms without damaging the volume, offsetting all the seams and so on.”

As the birth of the Guimard and the influence of James imply, teaching Rick Owens to young designers means moving beyond patternmaking and fashion history: his method stands as a singular example of where the final product is the result of a long process of reflection, experimentation and as Daher explains, evolution: “Rick Owens always analyzes what he has already created before and thinks about the next logical step, never starting from zero.” 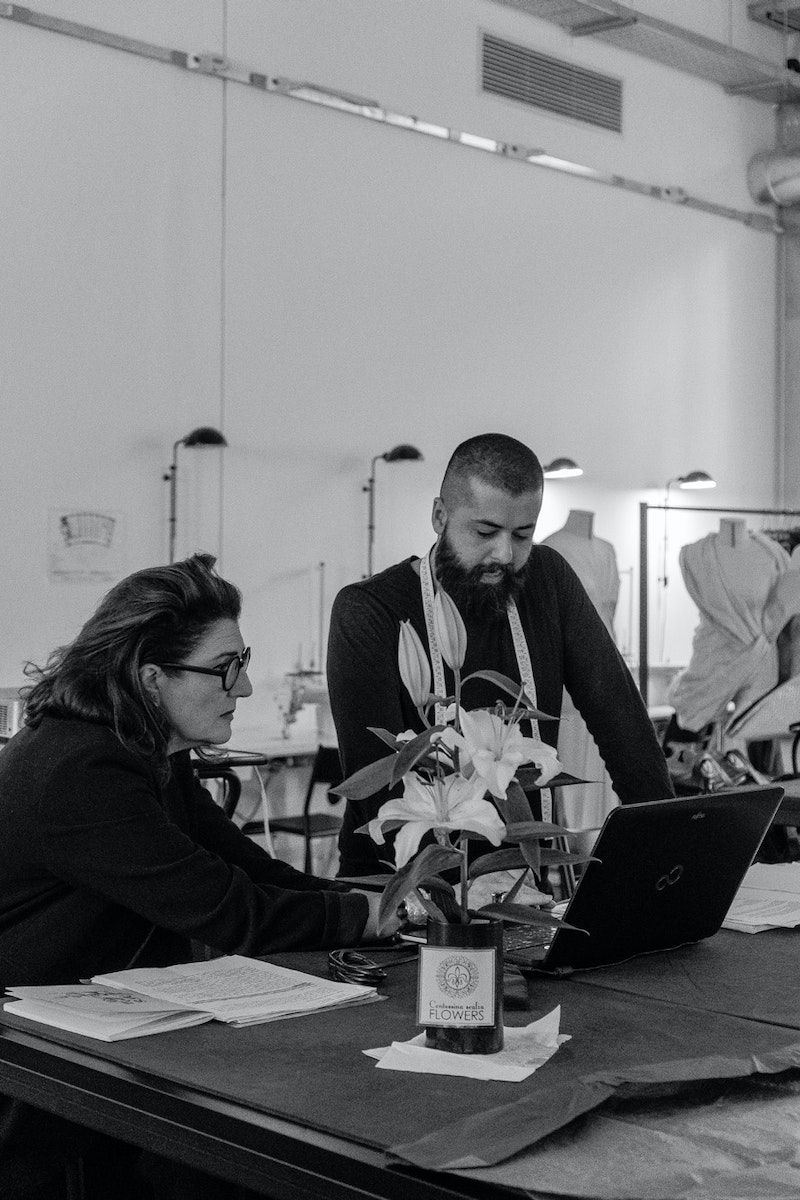 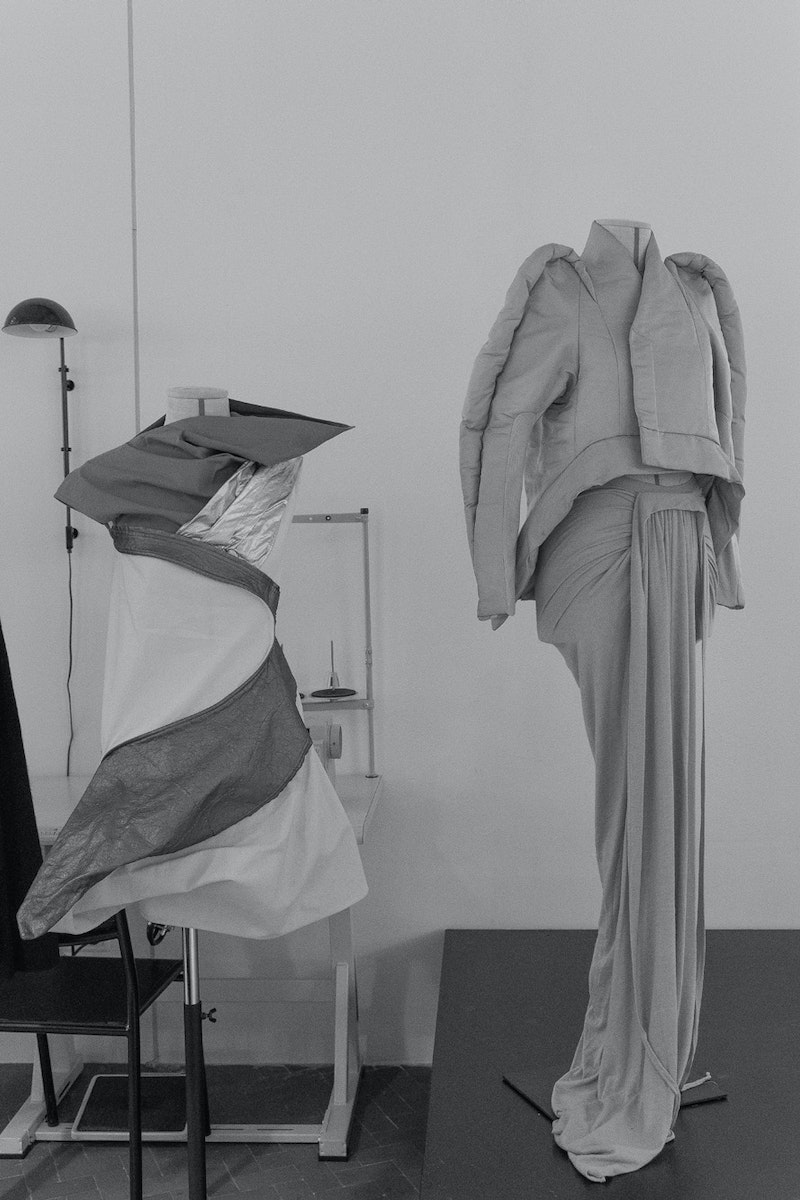 For the American designer, each collection becomes both an extinction and evolution of the previous, transforming the use of fabric into the creation of both garment and narrative. For each show, he explores new silhouettes with patterns from his archive, using them as the canvas bases on which he edits and creates new volumes and draperies. This thoughtful process explains Daher’s approach to Polimoda’s aspiring patternmakers and designers: “I never accept hearing [the students] say, ‘I did it because I like it.’ I want to know the reason for everything and what path led to this creation.”

The consistency and permanence of the production of Owens’ designs are rooted in his merging of influence from other disciplines and historic figures, a process that has founded his ability to create timeless, original pieces that transcend the boundaries of traditional fashion – a key point of reflection for students exploring their own creative processes. Allowing students to interact with these garments meant “transmitting part of my work experience as Head Patternmaker,” concludes Daher, “confirming [to them] the originality of final products when the creative and the technical aspect travel in hand. Giving the students the opportunity to analyze and touch the samples of the exhibition at the Triennale of Milan was a great satisfaction… I appreciate the curiosity of young people, their awareness in knowing they must have solid foundations. In this way, they can explore what they love in this wide and varied fashion world.”