This summer, our Masters in Fashion styling set out on a 5-day scamper through London, coming face to face with some of its unwavering fashion pillars. Set on making the experience both memorable and instructive, Mentor Keanan Duffty and professor Ruggero Lupo Mengoni guided the students through the streets and cultural landmarks of a city …

This summer, our Masters in Fashion styling set out on a 5-day scamper through London, coming face to face with some of its unwavering fashion pillars. Set on making the experience both memorable and instructive, Mentor Keanan Duffty and professor Ruggero Lupo Mengoni guided the students through the streets and cultural landmarks of a city renowned for having spawned revolutions aplenty. 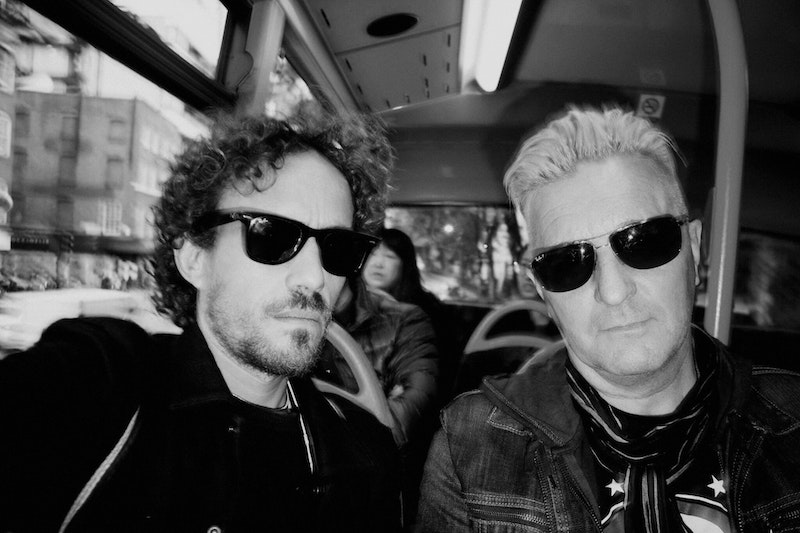 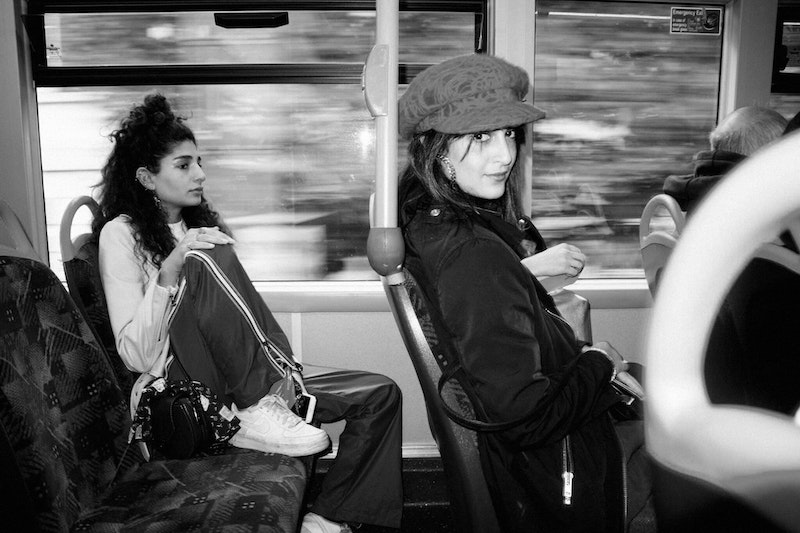 London is without doubt, a city of tremendous street style, where the mainstream fashion industry is informed and influenced by subcultures both old and emerging. This coexistence between high and low, between street and ‘haute’ was highlighted by the various businesses we visited. Many of the fundamental points that I present to the students in the class room; doing thorough research, building a strong creative network, being proactive in the creative process, were re-iterated by the industry professionals that we visited.

Into the tartan heart of British fashion

The students toured Vivienne Westwood’s studios in Battersea and witnessed the creative process from design to sales and marketing. While in the atelier, they were challenged by Andrea Kronthaler to quantify the need for ‘more stylists’ and Westwood’s archive curator stressed how important it is to watch films, read books and dive deep into research.

“I think that as a stylist and storyteller I like to raise awareness on specific things and criticize the world we live in in a fun way through the universe of images and communicating clothes” says Fashion Styling Master student Yasmine Saliba. “Vivienne Westwood has always been my favorite designer because she stands for something with every collection and uses her fashion platform in a positive way preaching for a better world; that’s why for me, to actually have the opportunity to go to her atelier in London and meet her husband and current creative director, staff, and discover the offices where all the magic happens, was amazing and I’m grateful to Polimoda for having arranged that.” 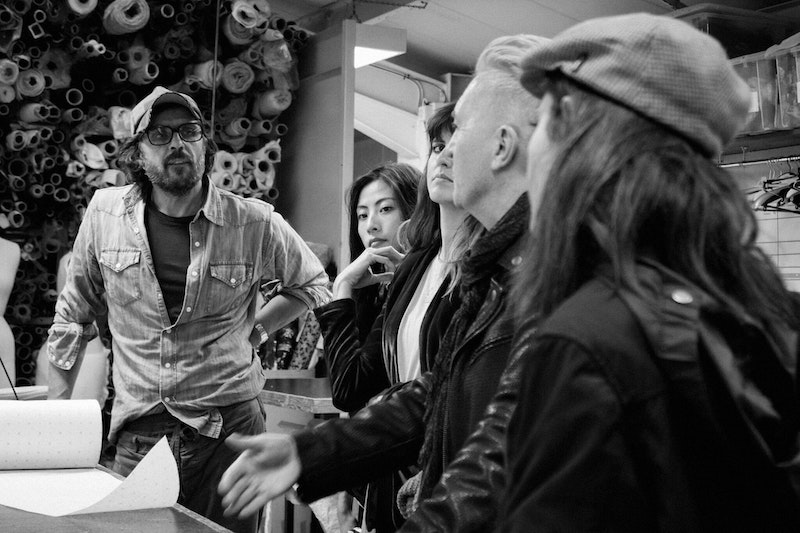 Spilling the tea on timeless style

Certain chance encounters can be positively eye-opening and the students experienced this first-hand when after touring London’s Textile and Fashion Museum with Central Saint Martin’s purple-headed print pundit Natalie Gibson, they were led up the colorful stairs to 70s fashion legend Zandra Rhodes’ apartment. Upon learning that the Polimoda class of 12 was in town, the eclectic designer invited them over for an impromptu tea party. Standing in her studio, the students were surrounded by Zandra Rhodes printed dresses, artist Andrew Logan’s broken mirror sculptures and Duggie Field’s hard-edged pop paintings.

“Meeting a creative individual who still pushes boundaries and creates her own fantastic universe, and makes tea for fifteen people!” Mentor Keanan Duffty laughs. “Though Zandra Rhodes is part of the rich tapestry of London fashion, she remains entirely relevant. I think the students heads spun a little when, after asking Zandra what she has done recently, Ms Rhodes said ‘Oh I did all the prints for Valentino last season’. That’s how this creative soul has managed to remain totally current over the years. It is an important lesson to young, emerging talents. Keep creating, every day.” 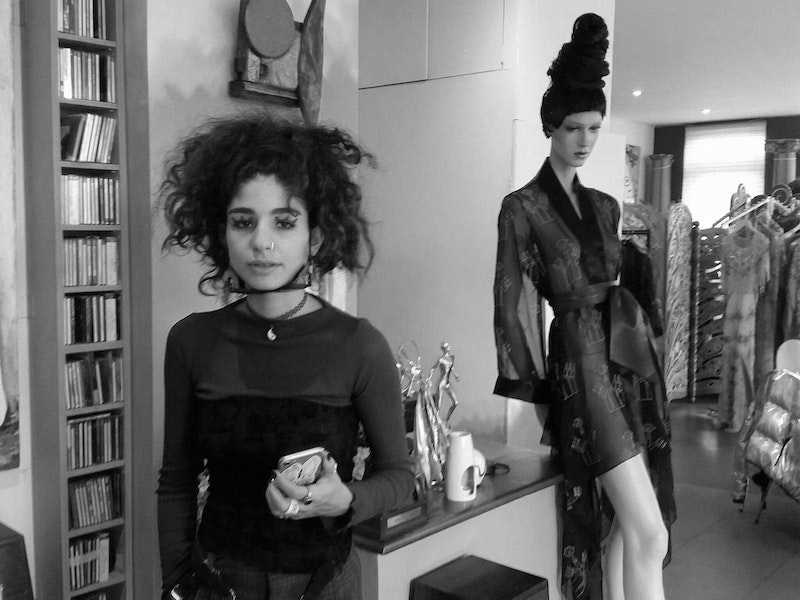 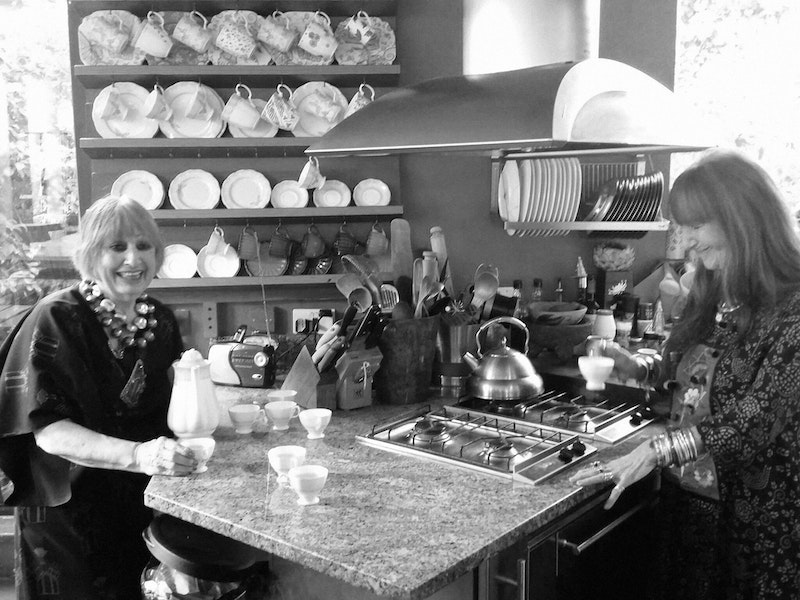 Taking tips from the top

The Master in Fashion Styling students visited the London headquarters of two top-tier media fashion media and communications agencies. Julian Vogel, founder of Modus Publicity explained the importance of building a strong creative network, a good ‘team’. Raoul Shah, founder of Exposure, discussed bringing together unexpected elements in order to create a new idea or concept; how knowing the fashion history is paramount in order to break the rules. The class also met up with important female figures such as fashion and creative director Emily Fitch Miller and Kate Sunderland of Luxury International recruitment company Denza.

“I can definitely say that my trip to London influenced the way I see myself in the future” says student Laetitia Mourad. “It gave me enlightening ideas on fashion jobs I didn’t know existed before within a company. It was my first time in London and I believe the benefits of learning through travel is very impactful for us students. The trip itself was a very useful networking tool too. Going to fashion agencies and events allowed us to create a repertory of profitable contacts in the industry.” 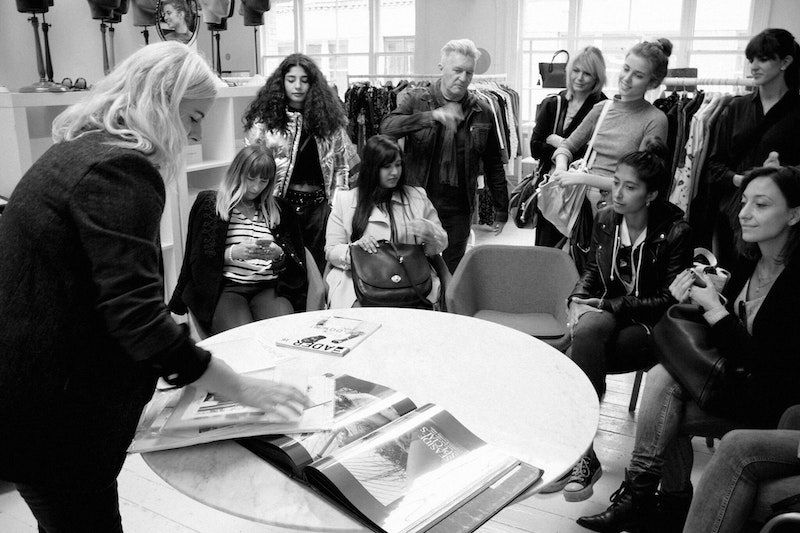 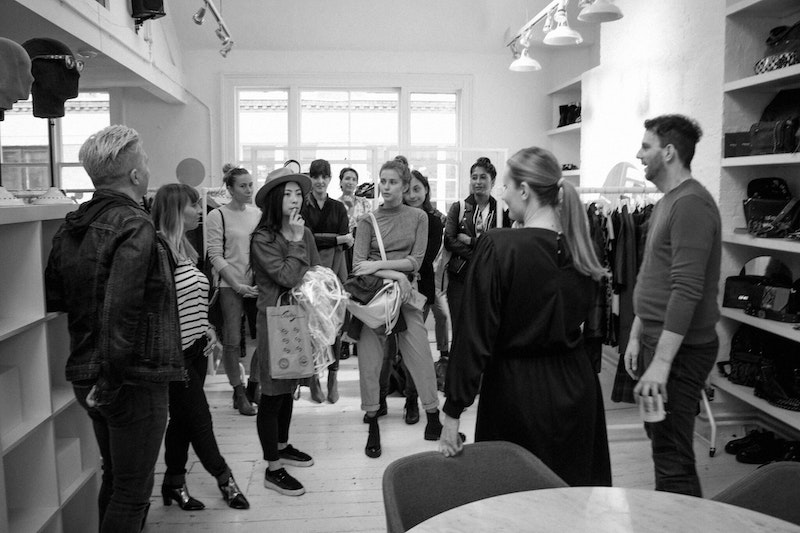 The Art of Sightseeing

Alongside in-depth visits to museums and galleries such as Tate Modern, The Balenciaga retrospective at the Victoria & Albert Museum and “The World of Anna Sui” exhibition at the Fashion and Textile Museum, students followed professor Ruggero Mengoni as he took to the side roads of London’s Brick Lane market, offering a close-up look at London’s multi-layered fashion fauna.

“Observing the funky punk pedestrians on a daily basis was impressive and relieving for me” states student Laetitia Mourad “Because I could express myself freely with my clothing without feeling weird and misjudged.”

Students also powered up on contemporary art at the White Cube Gallery, famous for curating the works of Damien Hirst and Tracey Emin, and went to the screening of Bjork’s latest video release The Gate – directed by Andrew Thomas Huang and featuring embroiderer James Merry alongside Gucci’s creative director Alessandro Michele – presented by Nowness at Surrey Street’s Store Studios. The trip would not have been complete without a visit to the legendary red phone box chosen by styling chameleon David Bowie for the back cover of his album The Rise And Fall Of Ziggy Stardust And The Spiders From Mars. 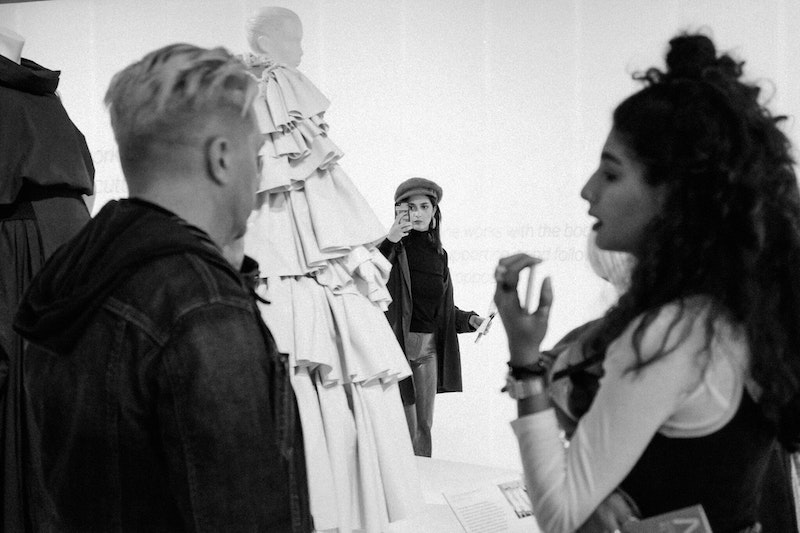 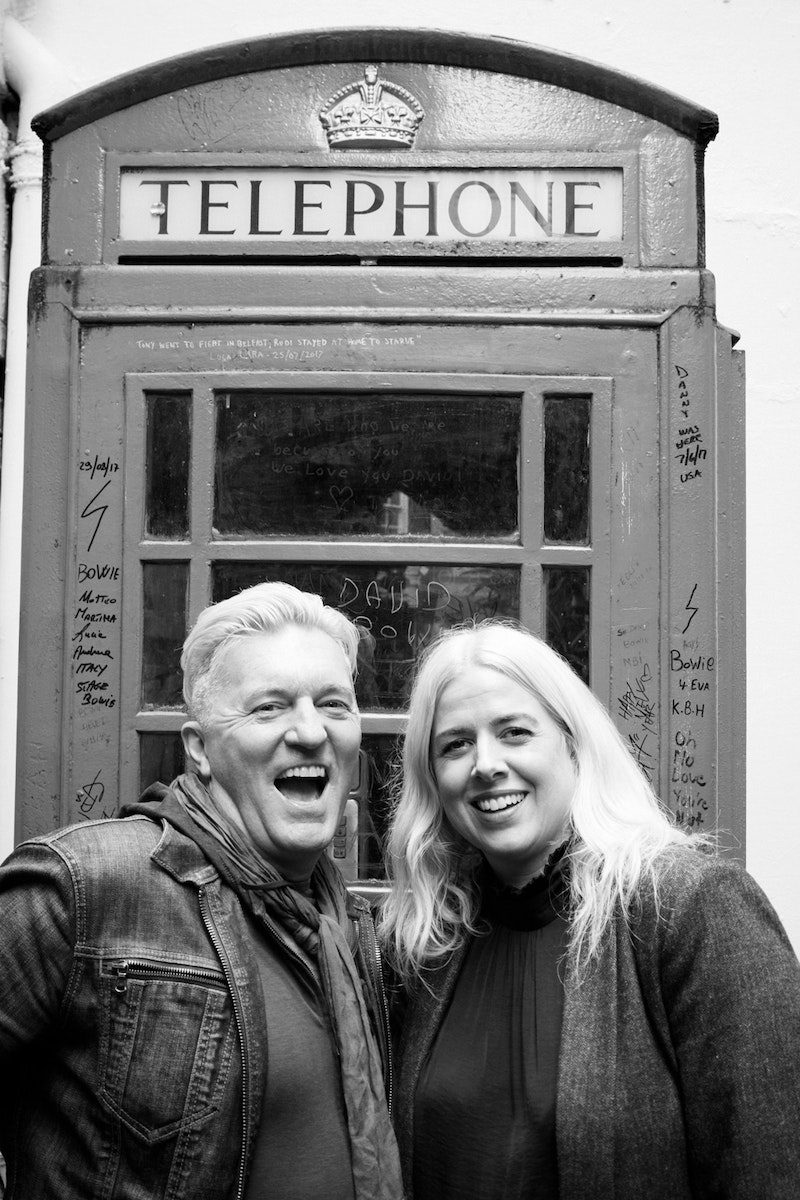 Much more was in store

As the class perused the bright nooks and crannies of Fiorucci’s comeback Soho flagship, in walked iconoclastic fashion consultant Stephen Mahoney. Acknowledged internationally for introducing and supporting emerging new talent, Mahoney took the group under his wing for a friendly chat. This pinnacle moment of the trip was undoubtedly designed by the Italian brand’s signature plump-lipped cherubs.

“When students asked how many Instagram followers he had they were visibly disappointed when Steve replied ‘Ten'” Duffty recounts. “That is until he started to list the ten; ‘Anna Wintour, Suzy Menkes, Karl Lagerfeld… I don’t want thousands of nobodies following me, what’s the point?'”

Professor Ruggero Lupo Mengoni chimes in “The students were able to come face-to-face with some of the world’s most influential fashion icons in their natural habitats, uncovering the human side of their long-standing experiences and the very underpinnings of their creative thoughts. A few have also manifested interest in evaluating the students’ work for future collaborations.” 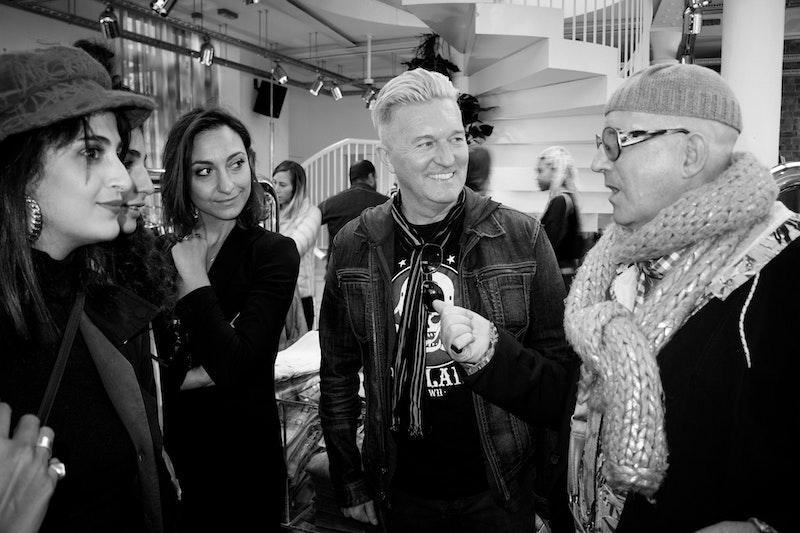 Below the skyline of everyday metropolis madness shimmers a constant mission for inspiration. When it comes to Fashion Styling, Polimoda is well aware that London’s calling must be heeded; for in order to create icons, one must meet icons.