A Special Welcome from Italo Zucchelli

The former Creative Director of Calvin Klein menswear returned to Polimoda for the first day of university for our newest master’s students. Mr Italo Zucchelli’s esteemed career in the fashion industry makes him perhaps the successful of all the Institute’s former students. After graduating from Polimoda in 1988, Zucchelli worked for Romeo Gigli in the …

The former Creative Director of Calvin Klein menswear returned to Polimoda for the first day of university for our newest master’s students.

Mr Italo Zucchelli’s esteemed career in the fashion industry makes him perhaps the successful of all the Institute’s former students. After graduating from Polimoda in 1988, Zucchelli worked for Romeo Gigli in the 90s and then headed up Jil Sander Menswear for 2 years before moving over to Calvin Klein, where he led the men’s collections for over 13 years. Zucchelli’s work for Calvin Klein continues to be widely celebrated, and was described as ‘subtle futurism’ by Tim Blanks.

With the silent accuracy of an atomic clock, he is engineering the American man for a new world order, the cool self-realized citizen of emerging global entropy. 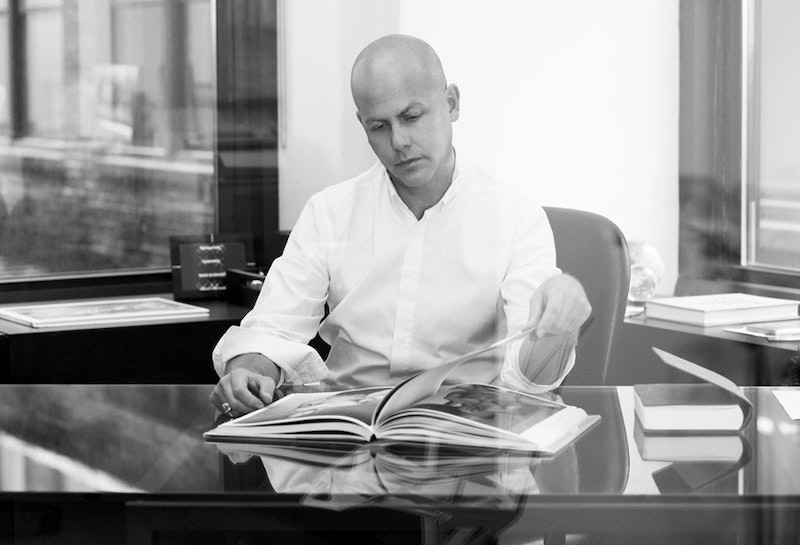 With still many rumours surrounding his next professional move, Zucchelli travelled to Polimoda on Friday, March 31st on Polimoda’s the first ever Alumni Day, to not only reconnect with his educational roots, but to also welcome the newest students beginning their master’s courses in Fashion Brand Management, Fashion Trend Forecasting, Fashion Styling, Luxury Business.

Italo Zucchelli was a part of the very first intake of Fashion Design students at Polimoda in 1986. After learning that Polimoda was to going to be founded in connection with FIT in New York, Zucchelli waited two years until the Institute opened its doors in Florence.

Mr. Zucchelli shared with generosity and enthusiasm his history and experience, passionately recounting the most significant moments of his career and what it means to be a creative director today:

On how things were

I’m very excited for you. You’re at the beginning of the journey. It’s a very different time from when I started because fashion has become more complicated in a way and easier in another way; easier because there is more technology, it’s easier to access to a lot of things. When I was a student you had to wait six months to see some images of a fashion show on magazines, today you livestream. On the other hand, today there’s more competition – too many clothes, to many brands, too many designers. I think that what’s important for you is to know who you are, work on who you are, and at least have your own point of view.

I think it’s important today, especially if you’re a designer, that you should be well informed on what is around. You should be aware of what is in the market. I don’t believe as a designer in staying in your tower – you’re going to be removed from reality.

On being a designer today

I think that as a designer you have to be conscious of what happens around you. Through the collaboration with the CEO you have to strategize on how to be efficient with a budget, how to get the best results. The better the relationship is between a creative director and a CEO, the better the longevity of that relationship and of the company will be.

When I was a student you could design almost everything and sell it. Today fashion has become more of a business: you should be creative but you also have to balance that with a certain amount of realistic business skills.

Calvin Klein, for example, is a company that changed the game a long time ago in advertising: when in 1992 the typical woman was Linda Evangelista or Naomi Campbell, and suddenly it gave you Kate Moss – this skinny girl, tall like this, that looks like the opposite of anybody else, and she’s still there today. That changed fashion forever. In a company like this, advertising is as important as the clothes. For another company it’s different, it depends on the company.

I’m really grateful because this is really what I wanted to do in my life; to be a designer. And I’ll continue to be a designer because it’s part of who I am and also part of how I express myself. I love it. This is the reason why I chose this school – and this one, not in Rome, not in Milan. I was obsessed with Polimoda, and I waited until they opened.